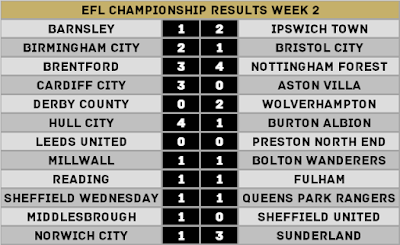 Ipswich Town recorded their second victory in a row as they overcame Barnsley 2-1 away from home. Bristol City were unable to repeat their form from the opening weekend as they went down 2-1 at St. Andrew's. Birmingham City winning that game 2-1.

A seven-goal thriller at Brentford as the Bees were beaten by Nottingham Forest. Three goals in a six minute period either side of half-time helped guide Forest to a big three points. Cardiff City cruised to a 3-0 win over a disappointing Aston Villa side.

Wolverhampton picked up a second win with a 2-0 victory away to Derby County whilst Burton Albion were no match for Hull City as the Tigers cruised to a 4-1 victory. Leeds were held to a scoreless draw by Preston North End whilst 1-1 draws at all three of Millwall v Bolton, Sheffield Wednesday v QPR and Reading v Fulham.

Middlesbrough's 1-0 win over Sheffield United saw them bounce back from an opening round defeat whilst Sunderland stunned Norwich City. A 3-1 victory in a heavyweight clash at Carrow Road. 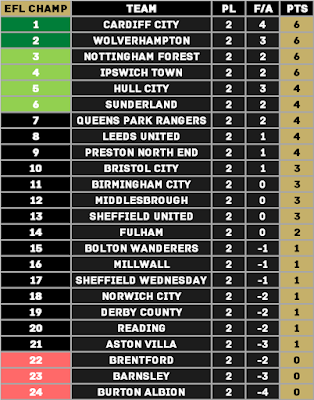 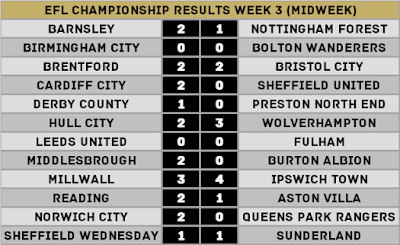 Barnsley's opening two losses were forgotten for now as they picked up a solid 2-1 victory at home over Nottingham Forest. Birmingham City and Bolton Wanderers couldn't be split in a scoreless draw at St. Andrew's whilst Bristol City scored late to earn a point away at Brentford. A 2-2 draw with the Bees.

Cardiff City continued their perfect start. A 2-0 win over Sheffield United was their third straight clean sheet to start the season. Derby County picked up their first win with a 1-0 home win over Preston North End. Meanwhile Wolverhampton continued their winning run with a hard-fought 3-2 victory away to Hull City. Two late goals for either side in that one.

Leeds United recorded another scoreless draw at home, this time to Fulham. Middlesbrough were fairly comfortable in their 2-0 win over Burton Albion whilst it was a seven-goal thriller in London as Millwall lost out to an 88th minute Ipswich Town goal.

Reading handed Aston Villa another lose that boosts Reading to 14th and keeps Villa in the relegation zone after three appearances. Norwich City knocked off QPR with a 2-0 win at Carrow Road whilst last but not least, Sunderland and Sheffield Wednesday drew 1-1 at Hillsborough. 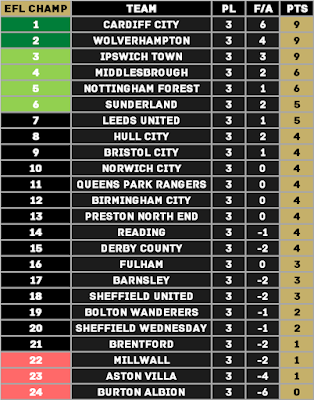 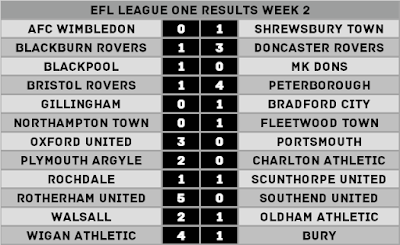 Rotherham United bounced back from an opening day defeat with a mammoth 5-0 win over Southend United. Kieffer Moore's first half hat-trick set the result up and it was all over before half time, 4-0 at the break. Fleetwood saw off Rotherham last week and would win their second straight with a 1-0 victory away to Northampton.

Portsmouth had some chances against Oxford United but three goals in a solid second half would send Oxford to the top of the table. The pick of the goals was a tidy finish from Slavia Prague loanee Gino Van Kessel to double the home side's lead midway through the second half.

Peterborough had a big 4-1 victory away to Bristol Rovers to move into the top two on goal difference. Rovers defence was at times non-existent as The Posh ran riot. Wigan Athletic won by the same margin at home to Bury. Lee Evans top-corner finish from range late on was the pick of the goals. 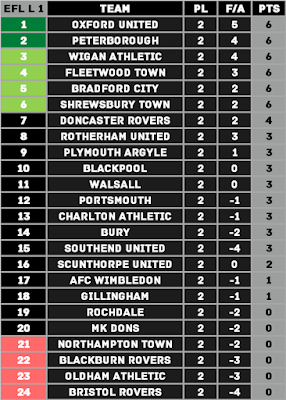 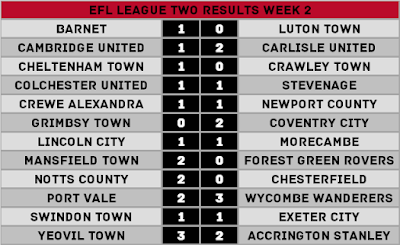 Coventry City are the only side to win their first two games after a 2-0 win away to Grimsby. One of the more bizarre goals you'll see saw Marc McNulty take the ball after a mix-up as Grimsby went to take a free-kick. Nathan Clarke passed it to goalkeeper James McKeown but the officials claimed that as the free-kick. A Jack Brimmer header would hand the away side their second win.

Fellow relegated side Chesterfield aren't having the same quality start to the season. They were shown a red card away to Notts County and would fall behind to a looping header from Jorge Grant. The Nottingham Forest loanee would score a second with a delightful free-kick in stoppage time.

After being smashed 8-2 last weekend, Yeovil bounced back in a big way. They went behind to Accrington Stanley after Billy Kee scored a rebounded tap-in. Olufela Olomola would equalise before Francois Zoko gave Yeovil a 2-1 lead. Olomola scored a second moments after Zoko's goal, putting it past an advancing goalkeeper. Kayden Jackson would score on the break but 3-2 would be the final score.

Lastly, a second defeat for Harry Kewell's Crawley Town as they went down 1-0 away to Cheltenham. 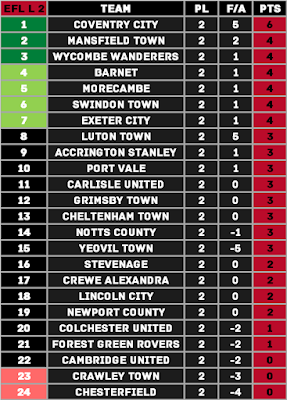