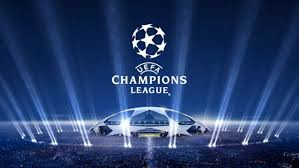 The 2016/17 UEFA Champions League Group Stage draw was conducted in Monaco this morning and Newysports has decided to take a quick look through each group as well as make predictions for how it will all play out over the next few months. 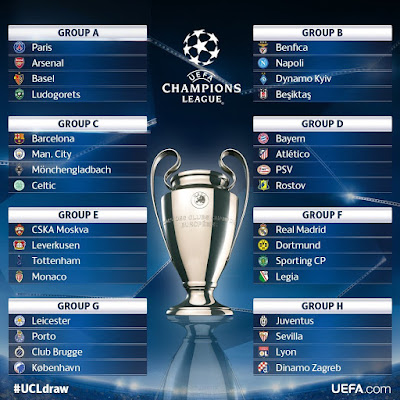 Arsenal fans will know all too well of their recent exploits in Europe. Six years in a row of being bundled out in the Round of 16 and when focusing on last year, they had to overcome a nervy Group Stage that almost saw them crash out to Olympiacos.

Now the Gunners find themselves up against the might of PSG, albeit without Zlatan Ibrahimovic. Arsene Wenger's men have not played the French powerhouse since 1993/94 when they defeated PSG 2-1 on aggregate in a season that saw Arsenal win the UEFA Cup Winner's Cup.

Whilst PSG will threaten, Arsenal need to win the group to boost their knockout stage hopes. Coming 3rd and missing the ROF16 could be the end of Arsene Wenger's time. The Frenchman against PSG will be delightful to watch and no doubt is one of the matches of the group stage.

Bulgarian champions Ludogorets Razgrad have a history with FC Basel. In 2013/14, they missed their first chance to play in the UCL Group Stage as they went down 6-2 on aggregate to the Swiss powerhouse. Then two years ago, the Bulgarian's picked up their only ever Group Stage win with a 1-0 home victory over Basel. They'll most likely battle it out with Basel to finish 3rd and guarantee Europa League knockout football.

Prediction: PSG without Zlatan is yet to debut on the European stage but that team are as strong as any in Europe. PSG to top the group and Arsenal to come in at 2nd behind them. Basel to take the Europa spot and Ludogorets to finish 4th.

Benfica are the Portuguese champions and last year made the Quarter Finals of the UEFA Champions League. Overcoming Russian powerhouse Zenit St. Petersburg in the Round of 16 before losing out to Bayern Munich in the Quarter Finals. They'll be delighted with their group although it is admittedly a tricky one.

Napoli need no introduction. One of Italian football's all-time best sides and they'll be looking to qualify for the Round of 16. Dynamo Kyiv of the Ukraine cannot be underestimated and Turkish champions Besiktas completes what is a real testing group and one that is incredibly difficult to predict.

Prediction: Whilst Benfica enter as the top-ranked side, Napoli will like their chances of finishing top. The Italian's to top the group with Benfica behind and then Besiktas to beat out Dynamo Kyiv and take the Europa League spot.

It wouldn't be the UEFA Champions League without a group of death and Group C proves to be just that. FC Barcelona are the kingpins of the group and a proven team in Europe whilst Manchester City are still looking to find a real foothold in the competition. Pep Guardiola will make a return to Camp Nou in what is a glamour clash.

It's those two teams that headline the group but Borussia Monchengladbach are one of Germany's most entertaining football sides and provided some decent clashes with City last season. And of course there's Celtic FC who need absolutely no introduction. Brendan Rodgers' side will look forward to filling Celtic Park for that Barcelona clash once again.

Prediction: This year is as good as any for Manchester City to become a powerhouse in Europe. Pep Guardiola is as serious as managers come and to one-up his old side would send a direct message around Europe that City are here to stay. Barcelona will finish top though. City behind and then Monchengladbach to finish 3rd.

Group D provides a clash that is on par with a UCL Final as Bayern Munich and Athletico Madrid resume their big-time rivalry in European competition. Last year it was Athletico who sent the Germans' packing and no doubt, revenge will be on the cards.

PSV Eindhoven are the Dutch champions but will struggle against the might of the top two sides. Athletico and Bayern in the same group all but means PSV will be playing the compete in the Europa League. FC Rostov make their UEFA Champions League debut. The Russian outfit came from nowhere to finish 2nd last season; denied the title on the final day by CSKA Moscow.

Tottenham Hotspur's return to the elite of European football comes with a fairly good-looking draw in the Group Stage. They downed Monaco last season with ease and will host them on Matchday 1 at new surroundings in the form of Wembley Stadium.

CSKA Moscow enter as the top-ranked side but are without doubt the firm outsiders. Bayer Leverkusen will like their chances of progressing as well so it's really another tough group to predict. Spurs will need to finish top to set up an easier trip through the Round of 16 but no doubt they'll need to produce the goods at tricky away venues like Leverkusen and of course the ever-tough trip to Moscow.

Prediction: CSKA Moscow will struggle and finish bottom. Monaco will take the Europa League spot whilst Tottenham will edge out the challenge of the German side Leverkusen and finish top of the group.

The European champions Real Madrid find themselves in Group F with a fellow powerhouse of European football in Borussia Dortmund. That is the glamour match-up of the group but Cristiano Ronaldo's clash with the side that made him in Sporting Lisbon will also be an interesting two matches to watch.

Legia Warsaw of Poland are the heavy-ranked outsiders of the group and only just made it in after edging out the fairytale side Dundalk of Ireland in the playoffs. Clashes with Real and Dortmund will likely break the attendance record at the Polish Army Stadium of just over 30,000. Big-money for the club but a massively tough ask to overcome the odds.

Prediction: Legia will be just making up the numbers in this tough group. Sporting would have enjoyed a place in an easier group whilst Dortmund and Real should cruise as they normally do at this stage of the competition. Real to finish top.

It still feels strange to write Leicester City's name as the English champions but nonetheless, football's fairytale side of last season will make a stunning debut in the UEFA Champions League in what is essentially the easiest group one could ask for. There'll be no glamour match with Dortmund or Athletico. Instead they face Porto, Club Brugge and Copenhagen.

It's a very even group but Scandinavian powerhouse FC Copenhagen will probably enter as the outsiders. Club Brugge come from a very tough Belgian league but it's Porto and Leicester who'll most likely battle it out for top spot. Leicester City have a lot to prove and the potential is there to make the knockout stages.

Claudio Ranieri's side may never play in this competition again so making the absolute most of it is without a doubt crucial.

Prediction: Leicester City are the favourites to win the group but FC Porto's experience will come in handy. The Portuguese side to take top spot whilst Club Brugge will deny Copenhagen the chance to play in the UEFA Europa League.

It wouldn't be the Champions League without Juventus. The Italian giants are back and the two time champions are looking to match the form that took them to the final two years ago. Last year they met their match in Bayern Munich in the Round of 16. That followed a Matchday 6 loss to none other than Sevilla.

The UEFA Europa League winners had a poor season domestically in Spain but lifted a third-straight Europa League crown to re-enter European football's elite competition. French side Lyon are a tricky side to take down as well and no side will be looking forward to a trip to a very hostile ground in Zagreb.

Prediction: Juventus will flex their muscles and ease their way into the knockout stages. Anything short of topping the group will be a disappointment. Sevilla have proven themselves year-in year-out in the Europa League but this year is one of their best chances to avoid that competition and make the Round of 16. Lyon should edge out Dinamo Zagreb for 3rd.