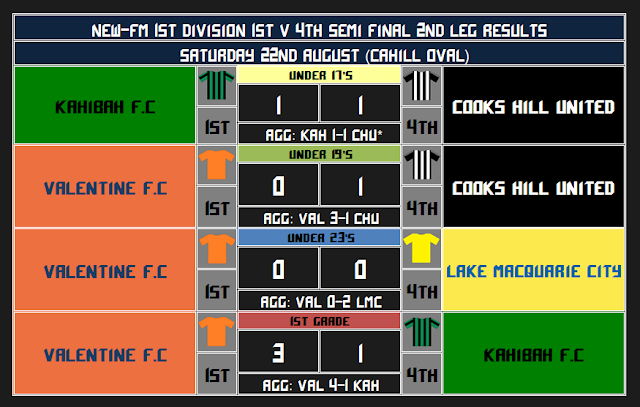 After drawing 0-0 last weekend with Minor Premiers Kahibah F.C, Cooks Hill United would no doubt have wanted a fast start in the second leg of the Semi Final and they got just that as Kurt Suleiman rounded Kahibah custodian Brock Turner and gave the away side a vital lead after just a matter of moments. It was the perfect start for the boys in black and white.

The Cookers looked on the front foot and with a crucial 1-0 away lead they took aim at scoring a second. Trouble was afoot for the Kahibah defence but they managed to hold out any potential goals. For what it's worth I thought Cooks Hill managed the majority of the chances in the first half.

An equaliser would be on the cards before half time as Bailey Cooper broke free of the Cookers' defender and slotted one past Kaia Roth. Suddenly the Green and Blacks were back in the match and looking a real chance of progressing to what would have been a well-earned Grand Final berth.

The second half was as dramatic as any game of football you'll see. Kahibah dominated the majority of the chances and were just denied time and time again. The crossbar played its part, last-grasp defending from Cooks Hill played it's part, the bounce of the ball, everything was going against Kahibah.

Cooks Hill had one or two chances to put the game away and entered a highly-nervy last twenty minutes knowing a goal to Kahibah was a certain end to their own finals hopes. Chances were wasted for both sides but it was Kahibah who just kept coming at the Cooks Hill goal.

The final few minutes of the game were intense for even the neutrals (I've been told the Valentine 19's were caught up in the moment rather than their warm-up). Kahibah were storming home through the likes of Matt Hughes and threatening winger Cooper Goodacre. Tensions were high and both benches were getting involved.

A late substitute for Cooks Hill forgot to take off his substitution bib and despite being an accident (or so I believe) he was given an earful from Kahibah who were no doubt frustrated. How Kahibah didn't get a second goal is beyond me, they had enough chances to do it and just couldn't.

The final, dramatic moment of the game saw the ball fall to a Kahibah attacker and from the penalty spot he fired it at goal only to be denied by an unbelievable diving save from Cookers keeper Kaia Roth. The gloveman was off his line but somehow dived backwards to palm it just over the bar.

The ball was cleared after a nervy two corners and the final whistle sealed Cooks Hill's unlikely qualification to the Grand Final. Both teams were given a standing ovation by the amazing support (the loudest fans of the day in any of the games in my opinion and some other's opinion as well). These boys put on a helluva game.

No doubt the Man of the Match award would go to Kaia Roth. The Cookers' keeper pulled off some great saves but none greater than the stunning save at the death. Sure he's probably pulled off some better saves technically this season but to pull that off in the last few moments of a Semi Final requires some skill.

There's a few things to come out of this game. Did Kahibah play their Grand Final at Lakes two weeks ago? I thought they had an off-day last week but they had more than enough chances to make something out of today. Cooks Hill pulled off the greatest escape and commited highway robbery in some minds.

Commiserations to Kahibah, it's been an incredible season for the Green and Blacks in the Under 17's. A fair few of the Grand Final winning side from last season were part of this team and winning the Minor Premiership from a quality Lakes side is no easy feat. 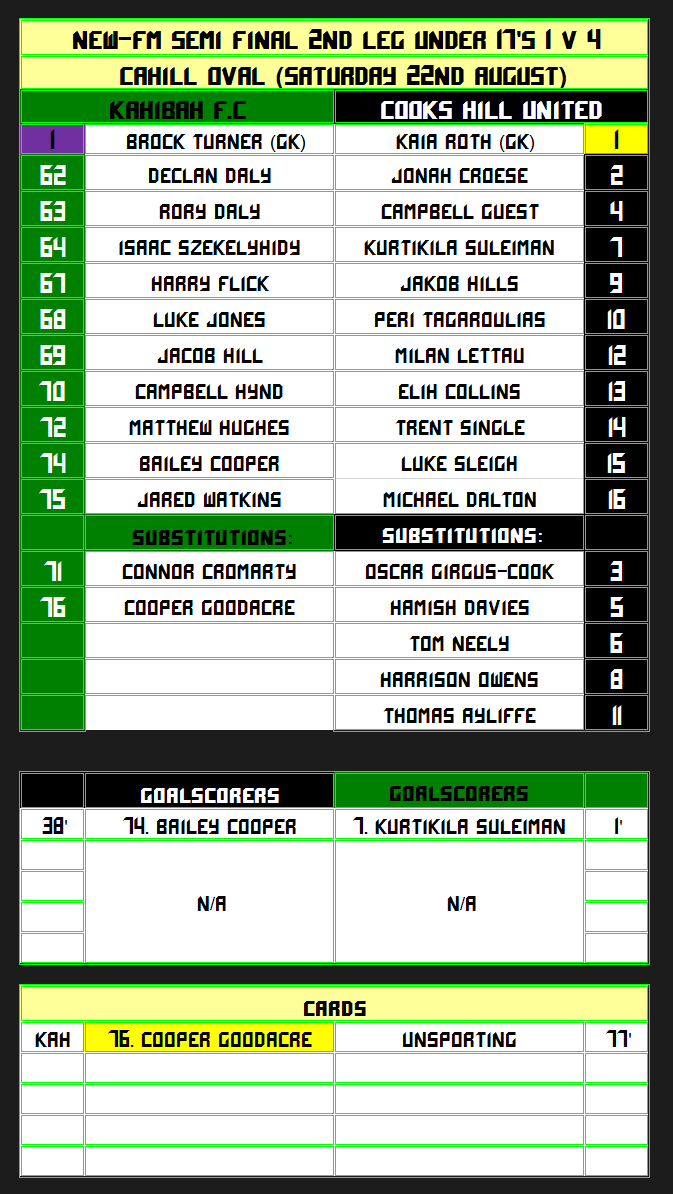 After the backs against the wall performance by the Under 17's, Cooks Hill's 19's would have had some inspiration in them based on that first game and they had to come out firing if they were any chance against Minor Premiers Valentine F.C.

The home side created the majority of chances in the first half but poor finishing would let them down. Cooks Hill too had one or two crucial chances that really should have gone in. The opener would come from the visitors though as left-back and captain on the day Jared Neale found the bottom right corner from around the edge of the box.

The second half was much of the same for both sides as chances were being spurned. Valentine especially had an absolute bucketload of chances and it's quiet amazing that they couldn't put the tie to bed in convincing fashion. The coach told me personally to call some of the misses a 'coach killer' so I'd imagine shooting practice might be on the cards during the week.

Cooks Hill were gallant and tried hard but ultimately couldn't get the goals they needed. Carlo Proietto had a decent game and midfielder Seb Lewis had one or two quality moments but as the game went on the Cookers would drop their heads and allow Valentine to have all the chances in the world.

The Phoenix should have won this game by three or four instead of losing by one. It's not often you see a team miss so many crucial chances. I thought Sam Powell had a quality game and some in the Cookers camp agreed with me. I personally thought the Godina brothers were decent as was left-back Kaleb Pearson. The #2 showed some strength and was really frustrating those in black and white. I'm hoping to see the Valentine side pumped up for a big game next week as they'll struggle against Lakes (possibly Belswans) if they can't score goals.

And so with that it's curtains on Cooks Hill's season in the Under 19's but it's been one of great quality in the first season for the club and I'm sure they'll be even stronger in 2016. 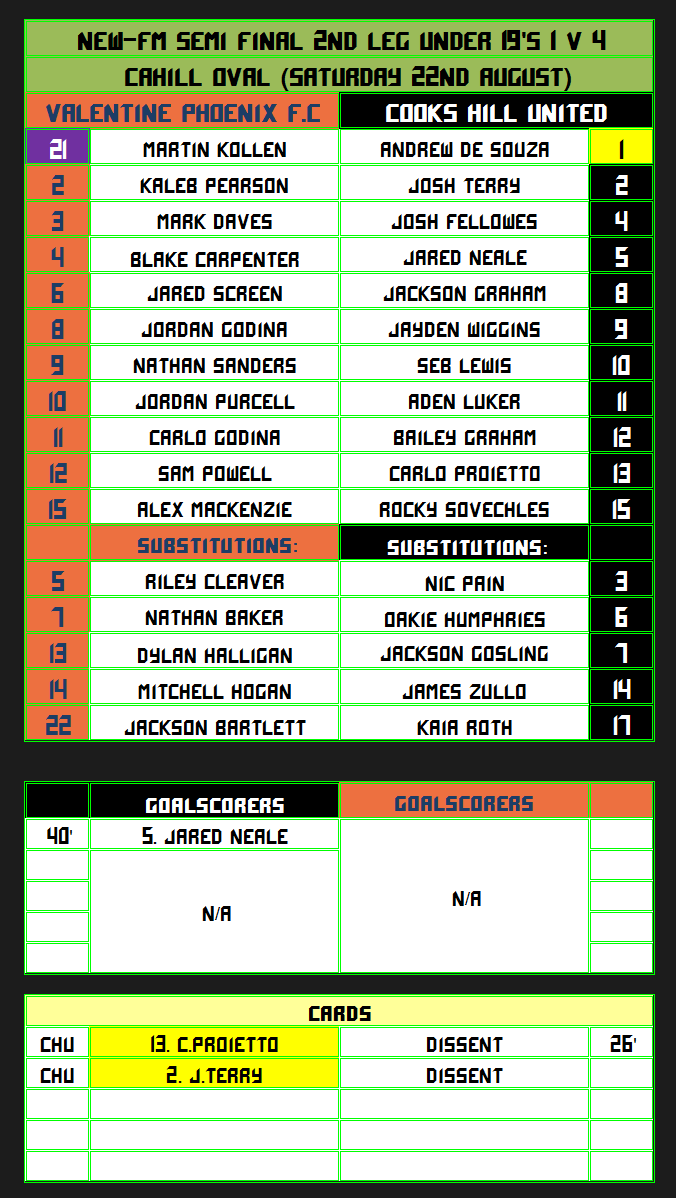 I was spending the majority of this game meeting some of the nice people at both these clubs and Kahibah as well so wasn't watching with a keen eye but didn't miss much to be honest. Both camps agreed with me that this game wasn't the most entertaining you'll ever see and again it was on that saw Valentine waste crucial chances.

After a scoreless first half, the game did get a bit better in the second. Lakes keeper Matthew Guest was required to make a couple of decent saves to keep the Roosters with a two-goal advantage whilst the Roosters were denied a third and what would have been a decisive goal by the offside flag.

A vital chance for Valentine was looking like a certain goal late on until a sliding Blake Dickinson would save it off the line and keep Lakes in front 2-0 on aggregate and that's how it would stay as the Roosters booked their spot in the Grand Final.

Ultimately it has to be considered a failure for a Valentine side that performed so well during the regular season to not make the Grand Final. They'll be kicking themselves over the crucial missed opportunities. 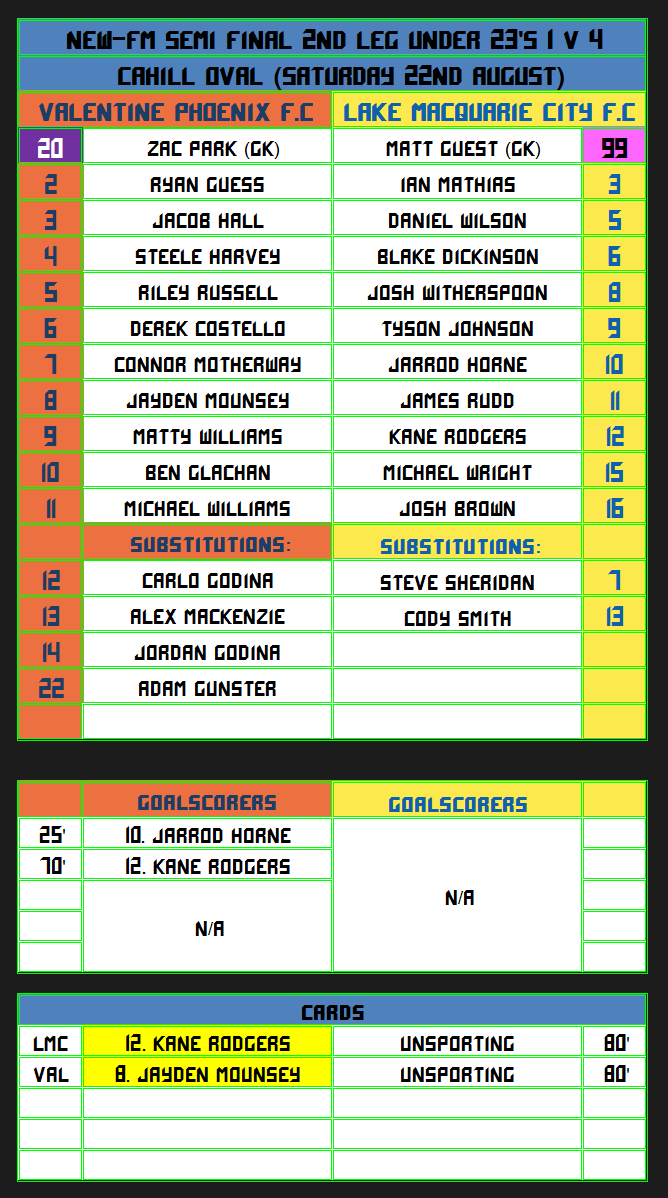 I know what you're thinking, 3-1 and 4-1 on aggregate, convincing right? Well that's not how it panned out at Cahill Oval. A fired-up Kahibah started the game strongly and it was an indication of things to come. Max Eschner would miss the best chance of first half, a simple one on one with the keeper and it was going to be a sign of things to come for the Green and Blacks.

The second half saw the tempo increase and Kahibah really take it to Valentine. The momentum would swing though and a Corey Atkinson chance was looking in if not for the last-grasp clearance from Andre Gumprecht. A few minutes later, Valentine were denied an obvious penalty and not long after that, Kahibah were denied their own up the other hand, maybe not as obvious though.

Luke Barnier would have a chance to put Valentine out of reach but was denied by the woodwork. Kahibah custodian Nick Hartnett had a worrying moment when he nearly fumbled the ball into his own net.

The defining moment of the game would see Valentine somewhat controversially steal the ball off of Kahibah (well I at least thought it was a foul) and get into the box. The attacker was brought down by Nick Hartnett and despite obviously going for the ball, the Kahibah keeper escaped what in my opinion should have been a red card.

Valentine's top goalscorer Scott McGinley would convert from the penalty spot and that's where the floodgates would open. After McGinley's 86th minute opener, Valentine would score twice, through Brett Adcock in the 88th minute and Luke Barnier in the 90th minute. Matt Lee would end his season with a consolation goal in the fourth minute of stoppage time but the day belonged to the home side.

I spoke at length's with some of the Kahibah staff and they agreed that the club have succeeded greatly this season. To achieve what they have in their first New-FM season is admirable and I'll go more in depth about all of that in my season review which will be most likely posted on Tuesday.

A special thanks to Valentine F.C for constantly using my articles in their programs and well wishes for the NPL. I'll miss having them in the New-FM league but will try and make a couple of NPL matches to see them in 2016.

And a thanks to both Valentine and Kahibah for their generous gifts of two playing shirts. I'm an avid jersey collector and to have two more local shirts is great. The referees actually asked me if I had signed with Valentine for next year! 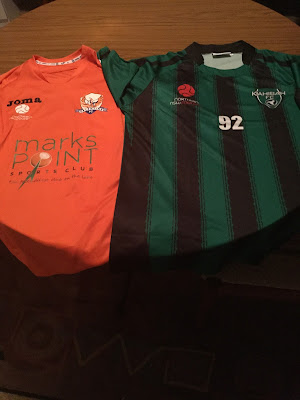