Football Mid North Coast's Under 13's weren't expected to have too much trouble in overcoming Weston last week and now find themselves in the Grand Final. I said last week that Max Lynch and Joshua Gardner were one's to watch out for and those two combined for FMNC's three goals last week.

Despite a goal from the competition's top goalscorer Daniel De Ridder (finishing with an amazing 29 for the season), Broadmeadow were downed by Edgeworth in a thrilling penalty shootout last week and suddenly the Eagles are 80 minutes away from glory.

Edgeworth picked up a big 1-0 win via a Jared Muller goal when they traveled up North earlier this season. The second meeting between these sides went the other way though as a double to Max Lynch and goals to Andrew Walton and Harry Amon helped the Mid North Coast boys to a comprehensive 4-0 win at Jack McLaughlan Oval.

It's technically a home game for Edgeworth but as mentioned, FMNC won when these sides last met and I think they're a great chance of winning the big one on Sunday morning.

Both Under 14 Semi Finals went the distance last week and looking at the two meetings between these two sides this season, I wouldn't be surprised at all to see it go the distance again and a penalty shootout be required to separate the two sides. Magic bundled out minor premiers Mid North Coast whilst Adamstown survived several scares against the Under 13 Emerging Jets.

Goals to Ryan Dean and top goalscorer Isaac Robinson would help Magic take FMNC to a penalty shootout and the Magicians got the job done 4-2 in the shootout. Adamstown also played a 2-2 draw and thanks to a double from William Fort, were able to take the Emerging Jets to a shootout where the young Buds would win 3-2.

Adamstown met Magic just two weeks ago and on that day, goals to Isaac Robinson and Matthew Haines helped Magic draw 2-2 against Adamstown, who scored through Dane Lawther and Laing Hudson. Notice that 2-2 scoreline, it's popping up a lot and it's my prediction for this game as well. Magic's my pick to win on penalties as they simply won their shootout more convincingly last weekend. This will be a cracker of a game.

There were two upsets in the Under 15's last week with Charlestown City overcoming Broadmeadow Magic in impressive fashion and Weston downing minor premiers Hamilton Olympic in front of a cheering crowd at Rockwell Automation Park. Now these sides find themselves in the Grand Final, despite finishing 3rd and 4th respectively.

The Blues were up 3-1 against Magic at half-time and never looked back. Two goals to Lewis Smith and a goal each to Rex Fernance and Albert Balogh helped Charlestown City to their second-consecutive Grand Final appearance after their premiership-winning performance in 2014.

Matt Fogarty is Weston's main threat and scored again last week in the Bears' 2-0 win over minor premiers Hamilton. Charlestown's defenders are the best in the league and have conceded just sixteen goals this season. If they can close down Fogarty they'll go a long way towards securing the top prize.

To say the Blues have the wood over Weston would be an understatement. Charlestown have played Weston twice in 2015 and on both occasions they won 3-0. Looking at last week's results and considering those previous meetings, I think Charlestown will be bringing home another trophy to Lisle Carr Oval after last year's effort.

Here's a fun fact, not one of the home sides at Darling Street won last week. All four 2nd-placed sides were eliminated and the 3rd and 4th placed outfits made the most of their chances. Broadmeadow's minor premiership-winning Under 17's will do battle with the Under 15 Emerging Jets in the main game on Sunday.

Magic's Kobe Simic had a day to remember in the Semi Final as he bagged a brace in his side's 2-0 win over the Weston Bears. The Emerging Jets were more convincing winners as they put four past Hamilton. Riley Smith got a double, Kaleb Cox got one and Kent Harrison got another as the Under 15 Emerging Jets booked their spot in the big dance.

The last time these sides met, a double to Jayden Saetta allowed Magic to come away with a 2-1 victory at the Lake Macquarie Regional Football Facility. They've beaten the Jets twice this season and I think they can do it again. It's not going to be easy by any means so I'll go with Broadmeadow via penalties. 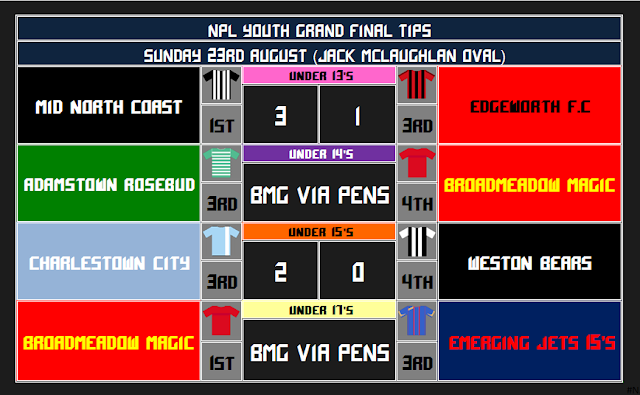