Kahibah F.C were gallant against NPL-bound Valentine last week and poor finishing cost the Green and Blacks dearly. After being the better side throughout the majority of the game, Kahibah were hit with the sucker punch as Valentine turned the tables and scored through Chris Brown.

Now the New-FM newcomers face an incredibly tough test at Cahill Oval. Valentine have a 1-0 away goal lead which means Kahibah will need a goal or two and a very good defensive performance. Andre Gumprecht's side have been strong defensively this season so it's definitely not impossible.

Valentine won't want to leave the New-FM 1st Division on the back end of a losing Semi Final performance so I'm tipping them to get over the line and book their spot in next week's Grand Final.

After winning the Minor Premiership, Valentine were stunned by a superb Lakes performance last weekend and via goals to Jarrod Horne and Kane Rodgers, the Roosters are leading the Under 23's Semi Final tie 2-0 after the first leg. That 6-0 loss Lakes suffered

Valentine will need a big effort, both in attack and in defence as a single goal for Lakes would all but seal the deal in my opinion. I think the Phoenix will have a better day in front of their home fans but I think Lakes will get over the line and make the Grand Final.

After a 3-0 defeat in the first leg last week, I'm sure even the most ardent Cooks Hill supporter (aka Myself) can't see a way back for the Cookers 19's. Valentine were superb last weekend at Kahibah and through goals to Sam Powell, Carlo Godina and Jordan Godina, the Phoenix have a firm foot in the Under 19's Grand Final.

Cooks Hill can't afford to concede any goals. It's already a mountain that they need to climb by scoring three goals and any more for Valentine would be the final nail in the coffin in my opinion. This is a home game for Valentine and they're the firm favourites. I've seen some crazy results this year but Cooks Hill coming back from a 3-0 1st leg loss would have to be the craziest.

Last Saturday's scoreless draw at Kahibah suited just the one team, Cooks Hill United. The Cookers battled hard in defence and kept Kahibah at bay in a result that saw the Green and Blacks frustratingly go very close to getting a result towards the end of the match. Don't get me wrong, Cooks Hill also created chances and can't be written off at all.

Kahibah are still heavy favourites in my opinion and after finishing Minor Premiers, I think missing the Grand Final would be seen as a failure. Cooks Hill are in the prime position as the away side; they've got nothing to lose and the situation is in their favour. One goal means Kahibah need two, two goals means Kahibah needs three, and so on.

There's two crucial players in this one that will go a long way towards earning a Grand Final spot for their team. Kahibah's Matt Hughes and Cooks Hill's Kaia Roth. Hughes as striker had a frustrating day last Saturday and was no doubt annoyed at missing a crucial chance in the second half and Roth was strong again between the sticks for Cooks Hill, as he has been for the majority of the season. This will be a cracker but I can't go past Kahibah. 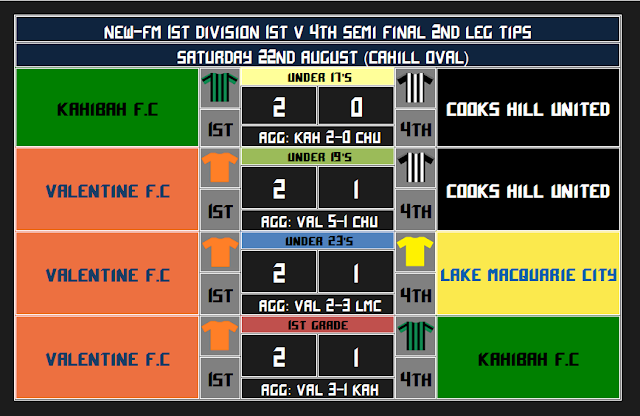 A barnstorming second half performance has put Lake Macquarie City on the verge of their first Grand Final in five years with a 3-1 victory over Wallsend F.C. I've done my research and can tell you that Wallsend's last State League Grand Final came 20 years ago. They haven't been back to the big stage (be it State League or 1st Division) since then. They've got nothing to lose this Sunday.

Wallsend must attack and attack hard and attack often or face being bundled out of the finals series in their return to 'big-time' football. They opened the scoring last week through Daniel Rufo and if Wallsend go down 1-0 in this one it's game over, it's that simple. Lakes got over the line via a Sam Walker double last week, along with a goal from his brother Tom and they are heavy favourites to progress to the Grand Final.

As a neutral and one of hopefully many neutrals who'll be there on Sunday, I hope Wallsend can make a match out of it and take the fight to Lakes. As a predictor though, it's the home side who'll be my vote to win again. This could be one of Lakes' biggest days in recent memory as they look to seal a Grand Final berth.

These two teams put on a decent game last week and it's still anyone's to win as they come into the second leg on the back of a 2-2 draw. Thornton's star up and comer Tanner White gave the Redbacks a lead but back-to-back goals to Gocha Abshilava (penalty) and Matthew Francis gave the Hornets a 2-1 lead. Mitch Kiczynski would save Thornton's bacon and put them in the box seat with a second away goal.

Now these sides clash in the second leg where Cessnock City will no doubt be hoping to produce the goods in defence and get a goal or two to book a spot in the Grand Final. It'll be a big occasion for either side if they play in a Grand Final so expect both to give all they've got for this game.

I'm a big fan of the two-legged finals system and I'm going to tip a 2-2 draw so we can see a penalty shootout. I know neither side would want that but they've drawn all three 2015 encounters so why not? And as for penalties, I'll go with Cessnock.

Lake Macquarie City are sitting on the verge of the Grand Final in all four grades and the 19's may have the biggest advantage of them after seeing off Belmont-Swansea 3-1 in the 1st leg last weekend. The Roosters scored first through Riley Stackman and doubled it through Jordan Harper.

Belswans' best player on the day was Matt Ellis and the midfielder scored a helluva goal to put the Belswans on the board but a heartbreaking own goal off of captain James Youngberry would leave the boys from Blacksmith teetering on the verge of elimination.

Lakes have the home ground advantage and three vital away goals. Belswans will need a heroic effort to come back from 3-1 down.

Just like the other 17's Semi Final, this game is evenly poised for a big second leg at Macquarie Field. Wallsend were benefactors of some incredible late drama last week that saw them given a late penalty and Ryan McClure convert from the spot to give the Red Devils a 1-1 draw with Lakes.

In all honesty, until the final twenty minutes, Lakes dominated this game and were incredibly unlucky not to come away with a win. Twice they found the woodwork and despite a goal from Man of the Match Josh Richardson, the Roosters would not have been happy with the draw and I think they'll be keen to hammer home their away goal advantage in this game.

It's not a secret that Lakes will progress to the Grand Final if they keep a clean sheet on Sunday and I personally think they'll do just that. 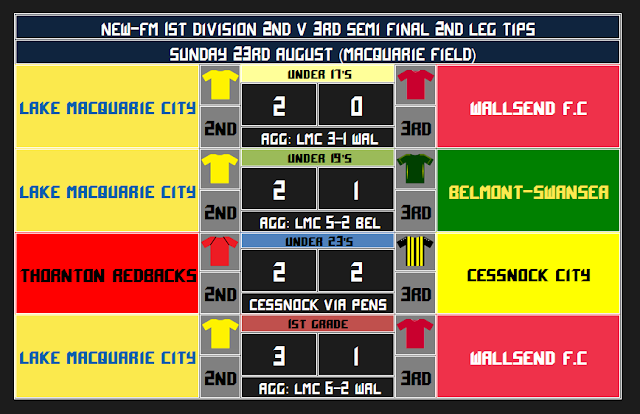