Kahibah Football Club's first season in the 'big time' of New-FM 1st Division football has seen them scrap into the Semi Finals with a gutsy 2-2 draw at Macquarie Field. Trust me, I was there last week and Kahibah will know that they survived. They got the job done but it was very, very close.

Now the Green and Blacks have been rewarded with hosting the first Semi Final of the 2015 New-FM Final Series. Kahibah Oval was hosting Interdistrict Semis last season as their ZPL team failed to make the playoffs. Just a year later, the Kahibah ground will be playing host to a crucial Semi Final 1st Leg.

Is this the biggest game in the history of Kahibah F.C. They've come from nowhere in the Zone Leagues to suddenly being a top four side in the New-FM competition. Credit has to go to Andre Gumprecht who has helped build a highly competitive at Kahibah. It doesn't matter if it's Under 17's or 1st Grade, Kahibah are a very serious football club and the results have proven that.

In front of them on Saturday are the Premiers. Valentine Phoenix have been the form side all season (bar a couple results) and put a fork in their promotion rivals Lake Macquarie City a few weeks back with a convincing 4-0 win. Top goalscorer and captain Scott McGinley has helped lead his side to the NPL.

The Phoenix traveled to Kahibah Oval not that long back and with goals from Luke Barnier and Paul McGinley, the NPL-bound Valentine scored a 2-0 victory over Kahibah. The first meeting between these two, played at Baxter Field, ended with a 2-2 draw. This is going to be an entertaining two-legged series.

Kahibah were decent last week against Lakes and really battled well in defence. Valentine however I feel will get the win as their form coming into this game is impressive to say the very least. Away goals count in the Semi Finals and if Valentine can get a couple here, I fear for Kahibah's Grand Final hopes. The Green and Blacks need to focus on defending in this one. It's Valentine for my money though.

Lake Macquarie City won't have to think too far back to when they last met runaway Minor Premiers Valentine F.C. On that day, Valentine were comfortable 6-0 winners and considering they put six past Lakes in the first meeting between these sides, I feel as though Valentine will come into this game with a lot of confidence.

Lakes' form as of late hasn't been convincing and this one looks pretty clear cut for me. Valentine will consider it a failure if they don't add to their Minor Premiership with the Major in three weeks' time. I don't think it'll be 6-0 but I really like Valentine's chances in this one and remember, with the away goal rule they can really build a foundation ahead of next week's second leg at Cahill Oval (where they'll be the away team on their own ground!)

I've been watching this Cooks Hill side for the majority of the season and finals football is no less than they deserve. They've been Cooks Hill's most entertaining and most fluent side in my honest opinion and I feel they will bring a fight to Valentine and potentially take a spot in the Grand Final.

Valentine's form is impressive with a tight 1-0 over Belswans being followed by a quality 4-0 win at Cessnock. Cooks Hill were moments away from beating Belswans three weeks ago but their last game was a disappointing late draw with West Wallsend. I feel as though the Cookers will definitely step up for this one though.

The Cahill Oval match between these two sides was one of the most entertaining match-ups I've seen this year and in my opinion this could be the match of the day at Kahibah Oval. I'll split the middle and tip the draw.

If the Under 19's isn't the pick of the lower grades, then this one certainly is as a unpredictable Cooks Hill outfit plays in-form Minor Premiers Kahibah F.C at Kahibah Oval. It's an away game for the Green and Blacks but ultimately it is on their home turf at Kahibah so make what you will of that.

When these sides last met, Kahibah rocketed to a dominate 7-0 win. Trust me when I saw dominate. It was Cooks Hill's worst game of the year and wasn't a true reflection of the Cookers' abilities. Long story short, it's going to be a bit closer on Saturday.

I'm a part of the Cooks Hill camp and anyone who knows me even a little bit will know that I'll be there on Saturday morning in black and white cheering the two teams on. I have to stay unbiased on here and this game is no exception.

Kahibah's minor premiership-sealing 5-2 victory over Lakes last weekend was one of the most, if not the most convincing wins I've seen in any grade this season. How do you put five past a team that hasn't lost all season. It's simply amazing and the confidence coming out of this Kahibah team is almost infectious. I'm barracking for Cooks Hill all the way but I really cannot see Kahibah losing this game. 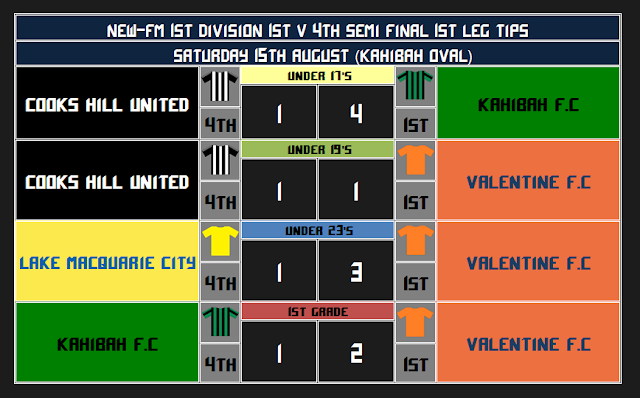 Lake Macquarie City kept their Minor Premiership hopes alive at the time with a great escape in the second half of their relocated mid-week fixture with Wallsend F.C. The Red Devils were leading 1-0 but would go down 2-1 in a result that ended their tilt at the title.

Lakes stumbled over the line against Kahibah F.C last week and the last time I saw Wallsend play was their sloppy 3-2 win over Cessnock City. They've gotten two straight wins over Kahibah and Toronto since then and I feel as though they know this is a must-win game on Sunday. Their home leg I feel is more winnable than the away leg at Macquarie Field.

When these sides met in the early rounds of the season, they produced what some would call the most entertaining game of the season as all sensibility went out the window in a 13-goal thriller. Fortunately or unfortunately (which ever way you look) those crazy scorelines have been seldom seen in the New-FM competition. They've been common in the Zone Leagues though if that's your thing.

Lakes put on a presentation last week for their top goalscorer Sam Walker who's bagged an unbelievable 38 goals this season and whilst he was kept reasonably quiet by Kahibah last week, if he can fire on Sunday, this two-leg affair could very well be on the way to being decided after the first game. Away goals count and Wallsend need to focus on defending and not letting Lakes get away from them.

I think Lakes will win this but I think it'll be close.

There's a few teams that haven't got any sides in the New-FM finals (West Wallsend, Toronto and Singleton come to mind) and it's certainly good to see these two quality Under 23's side have allowed their club to see some action in the finals. Both have had quality seasons and it's deserving that one of them will play on Grand Final day.

Cessnock City are an entertaining side to watch on their day and will be boosted by one or two key players who have been playing 1st Grade a fair bit, or so I believe (not sure on player eligibility and what not).

Thornton were leading the competition earlier this season but results fell away. I remember one of the two games I saw them play was the night they gave up a 3-0 lead and lost 4-3 to an out-of-form Cooks Hill outfit. Consistency cost the Redbacks a chance of the Minor Premiership, although it would have been a tough ask to deny Valentine.

These sides have met twice this season and on both occasions, they could not be split. This could very well be destined for a shootout after two legs if the team's can't be split. I'm going to tip a draw in the first leg.

Belmont-Swansea's Under 19's are one of the most entertaining sides to watch in my opinion. In fact, the Under 19's competition has in my opinion been the best of the lower grade competitions. There's been some entertaining games I've seen in the 19's this season and I believe the 19's will only get stronger in the next few seasons as the first batch of New-FM 17's come through and gain more experience in the competition. I probably sound like I'm raving on now!

Anyway, when these sides met for the first time this season at Macquarie Field, it was a highly entertaining 3-3 draw but the second game saw Lakes pull off a gutsy 1-0 win on the road at Blacksmiths.

Lakes are the only New-FM side with every team in the finals and it's an indication of how good that club is across the grades. I know the Belswans will have a few supporters and even some fellow New-FM players there to get behind their successful Under 19's. They come into the finals on the back of a highly convincing 7-1 win over Thornton Redbacks.

Lakes got the job done against Kahibah last week but I feel as though Belmont-Swansea will get the win in this game. They'll know they've got a tricky trip to Macquarie Field next weekend and they'll no doubt love to get a lead on the board ahead of the second leg.

These two sides played only a week or so back and Lake Macquarie City were the winners on that night. The Roosters had flown high all year but were grounded in a 5-2 loss to Kahibah last week. That defeat was their first of the season and denied them the Minor Premiership.

In my opinion, losing the Minor Premiership on the final day would have frustrated Lakes and I believe they'll come into the two-leg affair against Wallsend F.C with all guns blazing. They may not return to the freescoring form from earlier in the season but I can see them being a dangerous proposition for Wallsend.

Talking about Wallsed, they need to step it up. They were 4-0 winners over mid-table Toronto-Awaba last weekend but they're 0 & 4 against the top two sides (Lakes and Kahibah) this season and have to turn that around if they want to play in the Grand Final.

I believe it'll be a Lakes v Kahibah Grand Final in the Under 17's but if Wallsend want to play in the big one, they have to win this in my opinion and keep Lakes from getting a 1st leg away lead. It's Lakes for the win from me though. 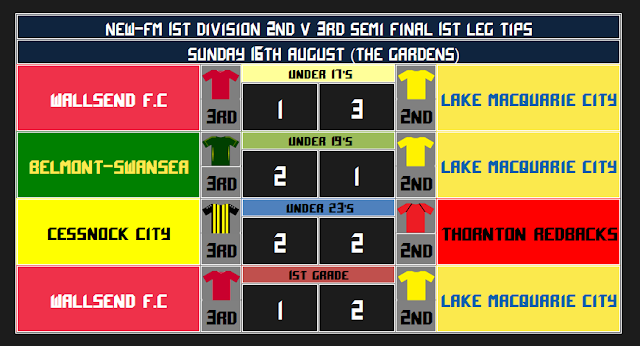