Editor Note: Due to this not being written by myself, I copy it from Messenger (where Alex sends it to me) into the Blogging site I use to write this. As a result, formatting goes out the window, unless I re-type the whole thing and as a result of that, the write-up doesn't look that good and is broken up by spaces.

I'd normally fix it but am short on time this week. As always, thanks to Alex for his valuable input on the English Premier League. Hopefully these previews can really keep you in the know as the local season ends and attention turns to the EPL.


Arsenal v Liverpool
Alex's MATCH OF THE ROUND:


Easily the game of the round in my opinion, two quality sides who have got off to decent starts.


Arsenal got their first win of the season against Crystal Palace but it didn't come easy for the Gunners, hanging onto a 2-1 lead after a couple of late scares. Some could debate about the final result after defender Francis Coquelin somehow didn't get sent off. The Frenchman got a yellow card late in the first half and then should of got a second 2 minutes later. He then made 2 more fouls in the 2nd half, one more blatant than the other but the referee just would not show that red card to him. I was beyond amazed.

Liverpool are 2 from 2 after they beat Bournemouth on Monday Night 1-0 thanks to a Christian Benteke strike. Liverpool again weren't at their best for me though. Although defensively strong, their goals have only been coming from the odd one chance which they have been taking. However having said that you only need one chance in football. For me just to cement it, I'd like to see Rogers sign maybe one more Centre Back just to cement that backline, somebody on the lines of Dante from Bayern Munich who is finding it hard to get game time over at the German club.

This game is a tricky one for me. I want to go for the draw but I have a really sneaky feeling Liverpool might edge this one.

Newcastle struggled against Swansea last weekend and were played off the park as far as stats are concerned also. Dominated in shots and possession which is worrying signs for Toon fans. Newcastle will be a team that won't achieve anything for me this season after just watching 2 games, they might have a decent cup run but I think they'll finish around 10th-13th this season.

United are improving every week, after last night's impressive 3-1 over Club Brugge in a UEFA Champions League Qualifier and another 1-0 win in the EPL over Villa, things are really looking up for the Red Devils. New Signing Memphis Depay was very good with his 2 goals over Brugge. Young gun Adnan Januzaj is also showing his potential after he scored last Friday night and is getting loads of game time in that Attacking Midfield role.

United's form is good at the moment and I just can't go past them.


Villa have started off quite nicely this season. A nice away win at Bournemouth to start the season and unfortunately didn't pick up any points against United which was predicted to happen. I'll still stick with my opinion on them. I think they are a club who will stay up just this year, I've got a feeling they'll finish around 15th-16th.

I side with both a win and a loss to start off their campaign. As I said in the Arsenal preview, Palace were unlucky not to get a point on the weekend. They do have some quality youth talent in their side with the likes of Yannick Bolasie, Wilfried Zaha ect. I think they'll also be a team with a mid table finish.
This one will be well battled by both teams and I'm going for the draw.

Fair play to Leicester. Two games two wins, and they are six vital points which some say they might need towards the back end of the season. Don't get me wrong they're doing great however if you look towards December and the final few games of the season in April/May. They are playing 4 top 6 teams from last year. They need the points early so they won't be fighting for them in the relegation scrap later on this season, but so far they are doing a great job and I congratulate them for that.


Tottenham need to hurry up and start winning if they have any chance of a top 4 finish this year as I said last week, the back end of the season they are great but the front half, they are slow off the mark. Pochettino needs to get this into his players heads and wins will start coming and goals from Harry Kane will soon start flying in.

Again a tricky one. Do I go with a consistent team who some would say aren't as good as Tottenham however haven't got off to the best of starts? Nah I'll go the draw. Haha.

Stoke are improving and with new Swiss signing Xherdan Shaqiri, I can't see them slowing down. 2 late goals from Arnautović and Diouf got them a well earned point at White Hart Lane on the weekend. Stoke have got potential to finish in the top half this season just like last when they finished 9th. I can see them being the team that everyone hates playing because they are a consistent club and are very strong at home.

2 decent results for both sides on the weekend. Norwich beating Sunderland at the Stadium Of Light and Stoke snatching 2 goals towards the end of the match to draw with Spurs 2-2.

Although winning on the weekend I still Norwich will struggle. Beating Sunderland is a good result don't get me wrong but I can't see them beating the big teams and causing upsets. They need to keep winning now as I've had a look at their fixtures and I can tell you from round 11 to round 18, it's incredibly hard, probably the hardest runs of games I've ever seen given, without those 8 rounds alone they have the likes of; Man City Away, Chelsea Away, Arsenal Home, Everton Home, Man United Away and Tottenham Away.

Because of their team structure and ability of the players I'm going with Stoke for this one.

Sunderland have had a terrible start to the season and need to do something about it now before it gets out of hand. All I'll say with them is, they must improve in their front line as it's been shocking recently. They need to start winning, that is it.

Swansea are off to a nice start, a draw at Chelsea and a convincing win against Newcastle on the weekend shows their potential and for me I can see them finishing around 10th this year. Swansea's key player this year so far has got to be Jonjo Shelvey. He runs miles in games and is certainly a player that the Swans will want to keep match fit.

I can't tip a team that hasn't shown me any good quality football this season so far, and because of that I'm going again with the away side.
Prediction: Sunderland 0-2 Swansea

West Ham went from team of the week in Round 1 to probably to the worst team of the week in Round 2. The Hammers were defeated 2-1 at home at the hands of Leicester. Star Signing Dimitri Payet got his first goal of the season but it wasn't enough. Goalkeeper Adrián will miss this weekends game due to suspension which will come as a heavy blow as I feel he is one of the best goalkeepers in league.

Young gun Reece Oxford got himself a start but only played 45 mins whilst Zárate and Kouyaté failed to have an impact as they to were substituted. Although West Ham had 70% possession of the ball, it wasn't even enough for them to get a point which shows which side took their chances with the ball.


Bournemouth are struggling. Two games into the season and two defeats. It's early stages like this where points are needed to help you fight relegation come May. Eddie Howe's side were unlucky against Liverpool on Monday night but they need to get points on the board urgently before it becomes out of hand.


It's a tough one but I think I'll too the home side.

West Brom are off to a bit of a sluggish start. After a disappointing 3-0 home loss to City and a 0-0 draw with Watford, it's not a start they were hoping for. This week it won't get any easier for them however the club feel it's best to play the harder opponents first, which I agree with, however they need to get some points off them.

Chelsea have had a shocking start to the season, drawing 1-1 at home to Swansea and then go on and lose 3-0 to Manchester City which some would say is a 6 pointer for the title race. Reports are that Pedro is very close to signing a deal with the current champions and could play this week against the Baggies. The Barcelona forward was reportedly supposed to be flying into Manchester (with United) rather than London. I'm eager to see the outcome to all of this.

I think Chelsea should win this week, because they certainly need to.
Prediction: West Brom 0-3 Chelsea

Finally! Everton showed their true colours against Southampton last week. Playing them off the park with a 3-0 win at St Mary's. Lukaku bagged himself and double and Ross Barkley got the third. Everton took their chances and looked quality. That's the best I've seen them play this season and the result showed it.

My tip for the title this year Manchester City swept Chelsea aside as they convincingly beat them 3-0 at the Eitihad Stadium. Striker Sergio Agüero showed his potential by nagging himself one and Vincent Kompany and Fernandinho got the others. Kompany has not only defended well so far this year but also earned himself 2 goals from as many matches. That's what a world class defender is all about. Defending well and also bagging your team a goal every now and again. Man City fans should be feeling confident about themselves after the start they've had this season so far.

If it was any other team I would predict Everton to get something out of the match this week but I just can't go against City after their fantastic recent form.
Prediction Everton 0-2 Manchester City

Watford worked hard for their 0-0 draw against West Brom and deserved the point. However, for me it's teams like West Brom that Watford need to be beating especially at home as I feel these both of them will finish around the drop zone. If there's one more Watford need to start scoring it's striker Troy Deeney. He is a fantastic striker and he'll be a big influence on where the Hornets finish this year.

Southampton were very poor against Everton. They didn't take their chances in the match and as a result got beat. Southampton have the talent to do so much in this league it I feel at the moment it's being wasted. With the players they've got I'd love to see them play a more attacking style of play because you only have to look at the forwards they've got and it screams out world-class talent.
I can't see this game being exciting at all, but probably saying that it'll probably be a cracker but I'll stick with my gut instinct. 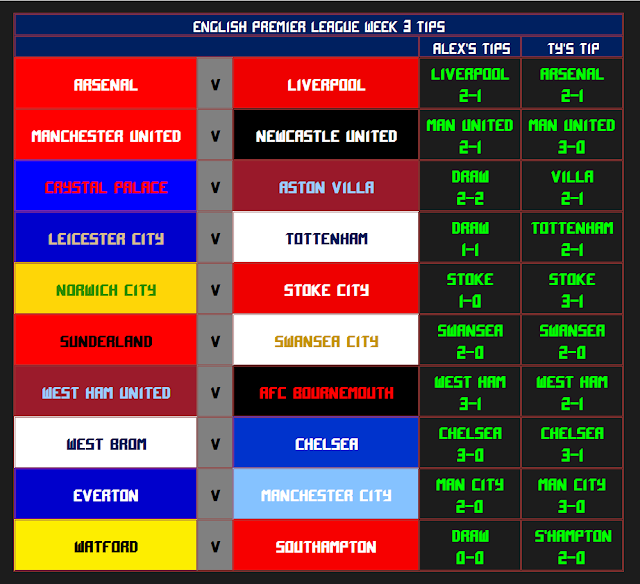