Editor's Note: Apologies for the black highlighting. It's due to this not being written straight onto Blogger (my blog provider) and it wouldn't be able to be seen without a black highlight so unfortunately that's unavoidable.

Thanks again to Alex Evans for his previewing work.

*Also, as a City fan myself it's great to see Man City at the top with Arsenal in the drop zone and Chelsea and United both sitting outside the top six. Would like to personally see Leicester, Palace and West Ham round out the top four come season's end. Haha

Manchester City got their season off to a winning start after an impressive (and predicted) 3-0 win over West Brom at The Hawthorns on Monday Night. Star Player Yaya Toure bagged himself a double whilst Belgian international Vincent Kompany got the third. £49 million pound signing Raheem Sterling played well as did attacking midfielder David Silva.

Chelsea failed to get maximum points against Swansea on Saturday night which already is 2 valuable points dropped for this year's title race. As always Brazilian Midfielder Oscar looked quality and Eden Hazard will sure not disappoint this season.


These two teams along with potentially Arsenal, United and maybe Liverpool are the only teams with a realistic chance of winning the title this year and if I had to pick right now, it would have to be City. I'm a type of person who predicts early on who's going to win the league and who's going down and going off Round 1 City just look like the overall team. Last year I predicted correctly that Burnley, QPR and Hull were going down and if I had to pick 3 to go down this season it would be Leicester, Norwich and Watford. 3 teams who are 3 small fishes in a big pond. I don't think they will cope.
Going back to this game and for the first time in over a year I'm going to tip against Chelsea and tip the Sky Blues. City were very good on Monday night and I'm going to tip them to edge this one but only just. Prediction: City 1-0 Chelsea

I think every United fan will be feeling good about themselves after a very cheeky but successful win over Tottenham last weekend. United will be looking for another 3 points this week on this Friday night fixture. Yes that's right, the EPL have got a Friday night game this year but as far as I believe it's the only one.

Villa played some nice football against Bournemouth and did manage to sneak a 1-0 win away from home. I was impressed with new signing Micah Richards and Rudy Gestede did very well when he came off the bench and his hard work payed off, after he scored the only and winning goal in the match in the 72nd minute. This game is a tough one to predict, I want to say a draw but I'm going with United. Prediction: Villa 0-1 United

I said last week Everton looked poor against Leeds when they lost to them in a trial match and I just thought they might of been having an off day..... I was wrong. They were once again poor this week against Watford only managing a draw with them. No disrespect to Watford as they did play okay but if Everton can't beat a championship side (Leeds) then follow that up by drawing with Watford at Goodison Park then something isn't quite right. They have a strong side with a stack of potential but if I were a Toffee fan I'd be demanding answers now before this starts getting messy. Southampton looked well knitted against Newcastle on Sunday night and I feel they can potentially earn a Europa spot. It's no secret they can score goals however after also conceding a couple of soft goals this week, will the loss of Nathaniel Clyne over the summer play a part in defensive issues for the Saints this year? Everton need to improve, simple as that. Improvement is in Southampton's nature. After being a League One side 4 years ago and now pushing for a top 6 finish in the EPL this year I think they have earnt my vote for this week. Prediction: Saints 3-1 Everton

Both teams will be looking to bounce back after disappointing losses over the weekend. Sunderland were played off the park against Leicester losing 4-2. Defending has always been a struggle for the Black Cats over the years and will this finally be the year where it will cost them and send them down? Defoe was definitely Sunderland's best player on the weekend and I along with the Sunderland fans are expecting another big game from the former England international. As tipped, Norwich got beaten on Saturday by Palace. Norwich just lacked that spark in the midfield for me. The Canaries looked very weak at the backline as well and I'm tipping them to go down this season. They just haven't got it for me. They need fresh new talent. Like Everton, Norwich need to improve before I can safely tip them to win. The home advantage should be enough for Sunderland in my opinion but they need to work on their defending. Prediction: Sunderland 2-1 Norwich

I'll start off by saying, this will be a nice game to watch. Swansea looked well structured and earnt themselves an impressive 2-2 draw against Chelsea at Stamford Bridge on Saturday. Andre Ayew and Bafétimbi Gomis got on the score sheet. Swansea have been a team that have quickly adapted to Premier League life over the 3 years they've been in this competition and like Southampton it's onwards and upwards from here. Newcastle are coming into this game after a 2-2 draw with Southampton on Sunday night. Newcastle's squads full of talent this year. Papists Cisse and Georginio Wijnaldum have already shown that they are capable of putting the ball in the back of the net and Fabricio Coloccini looked strong at the backline. All in all I think Newcastle will have a stable season, which I think any Newcastle fan would be happy in taking after last seasons performance. The Swans have shown me what they can do this week and with this being their first home game for the season I think they'll pinch this one. Prediction: Swansea 2-1 Newcastle

Why Tottenham have not been challenging for a top 4 finish over the years is not because of their back end finish to the season, it's because of their poor starts. If they want any chance of a top 4 finish they need to find season consistency. With players like Harry Kane and a goalkeepers like Hugo Lloris, they have a chance but it'll be hard. Stoke were unlucky not to come away with a point if not all 3 against Liverpool at The Britannia on Sunday. The Potters played some nice football against the Reds but were unsuccessful with the result. I don't mind Stoke and once again I think it'll be another average season. Spurs for me in this one. First home game of the season. Unlucky last week against United so that's why I think they'll have too much class over Stoke.
Prediction: Tottenham 3-1 Stoke
*Just woke up this morning to find Xherdan Shaqiri has signed for Stoke. Will he make his debut this week?*

Watford played well against Everton over the weekend and deserved all 3 points for me at Goodison Park if I'm blatantly honest. The Hornets held the ball well and there passes were top notch. Albion struggled big time on Monday night against Manchester City at home and never really properly got into the game. As I said, I think the Baggies will struggle this year but not as much as Watford who I predicted to go down earlier in my preview. This has to be a draw for me. It'll be an entertaining game for all too watch as well I think Prediction Watford 1-1 West Brom

Both teams had impressive wins last weekend however I think we can all agree that West Ham produced the shock of the round. I watched West Ham defeat Arsenal 2-0 at the Emirates and the Hammers played a disappointing Arsenal off the park. Debutant and 16 year old centre defensive midfielder Reece Oxford had no troubles in defending the likes of Giroud, Ozil, Cazorla, Sanchez (when he came on) ect. He really played exceptional all around and some are saying he will be an English Yaya Toure once older. It wasn't just Oxford who impressed it was the whole squad. Kouyaté and Zarate did well and mark key man Dimitri Payet showed his potential. Leicester also started off their campaign with a 4-2 win over Sunderland. Algerian Riyad Mahrez got himself and double whilst Marc Albrighton and James Vardy bagged themselves a goal. Leicester controlled the game and picked up 3 valuable points which could help them dearly towards the back end of the season. West Ham were quality and I just can't overlook them again for this week. Prediction: West Ham 2-0 Leicester

As I said last week, Palace looked organised in pre-season and it showed after producing a 3-1 away win against Norwich. Palace kept possession well and had no troubles against a poor Norwich side. To be totally honest I didn't think Arsenal played too bad against West Ham, it's just The Hammers played exceptionally well. New Signing Petr Cech is being faulted for the second goal which was conceded and I can see why. Is Petr Cech past his best and have Arsenal wasted money on him? As I said last week. Arsenal always beat the top teams but they are their own worst enemies when they lose to mid table and bottom table clubs. If they have any chance in winning the title this year they need to start winning. I'll tip a draw here, Arsenal need to find form however Palace have already found there's. Prediction Palace 1-1 Arsenal

Liverpool left it late last week, however did manage to take all 3 points away from the Brittania Stadium thanks to a 86th minute screamer from Philippe Coutinho. Liverpool need to improve however they often do as the season wears on. Bournemouth didn't start their season off with a bang going down 1-0 to Aston Villa at home. Bournemouth passing accuracy has been good over the past couple of seasons and it again was good against Villa average 85%. However goals win you matches and they need to start finding them otherwise their season could be jeopardised. Can't go past Liverpool in this one. Prediction: Liverpool 4-1 Bournemouth.

*Editor Note: I've decided to put down my own tips just to give you two points of views each week. Alex will probably get them right more often but you never know in football. -Ty 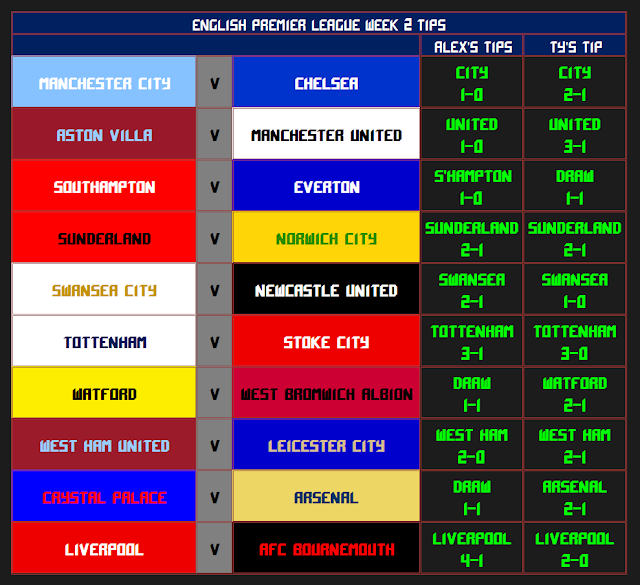 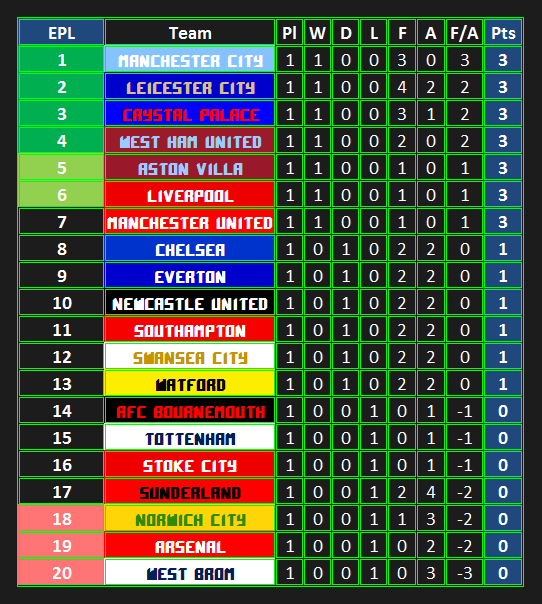