The potential minor-premiership defining clash at Arthur Edden Oval ended with the Edgeworth Eagles picking up their second win of the season over last season's champions the Lambton Jaffas in front of a healthy crowd at the home of the Jaffas.

Ayden Brice opened the scoring for the visitors but it was a short-lived lead as the Jaffas hit straight back through former Eagle Alex Palozzi. A goal to Dylan Holz gave Edgeworth a 2-1 lead at half-time and that's how it would stay as the ladder-leaders stretched their lead at the top and sent the Jaffas crashing down to fourth spot.

The Eagles can boost their minor-premiership hopes next week but it won't be easy as they host a desperate South Cardiff at Jack McLaughlan Oval. The Jaffas will be looking to bounce back with a win over Adamstown.

In the lower grades, the Under 22's finished with an entertaining 3-3 draw between two quality sides. The Eagles got the better of Lambton in the Under 19's, winning 2-1.

Maitland's relegation fears have returned slightly as they went down 2-0 to Adamstown at Cooks Square Park. Goals to Travis Cooper and Nick Bale gave the visitors their sixth win of the campaign whilst it was a 10th loss of the season for the Magpies, who now find themselves just two points ahead of bottom-placed South Cardiff.

Adamstown won a bottom of the table clash in the Under 22's 1-0 whilst it was the opposite in the 19's as Maitland recorded a 1-0 win in the cellar-dweller match.

I was prepared to write off South Cardiff a couple of weeks ago but after taking Hamilton to the absolute limit last week, the Gunners produced their best result of the season today by downing Broadmeadow Magic 3-1 at Ulinga Oval. I've heard rumours that Magic rested one or two key players but not being there I can't really comment (I decided to head to Wallsend for New-FM for those wondering why I didn't show up at this fixture.)

It's a crucial win for South Cardiff and one that gives them hope of avoided the drop. In the 22's, the sides were split 2-2, a much better result for South Cardiff than the 8-2 hiding they got earlier this season at the hands of Magic whilst the 19's finished 2-0 to the away side.

I'm going to be a bit harsh now. This performance and result is simply not good enough by the Jets Youth. I've heard they had one or two players out but there's no excuse for a loss like this. I've been told it could have ended in double digits and for the regions' premier feeder team to the A-League, results need to be better than this.

I'll be one of many people (including the whole Valentine Phoenix club) who'll be disappointed if the Jets Youth finish last and block any potential promotion/relegation swap. The rules state that the Jets Youth can't be relegated and can't play finals. They're here mainly for development and if development includes copping 7-0 losses than I might just be the next King of England.

Weston solidified their finals hopes with a 1-0 win over Charlestown City at Rockwell Automation Park. A Liam Thornton goal early on was enough for the Bears to hang on for a deserved victory.

In the 22's, Charlestown City were 2-0 winners and the visitors picked up a stunning 3-1 win over top of the table Weston in the Under 19's as well. 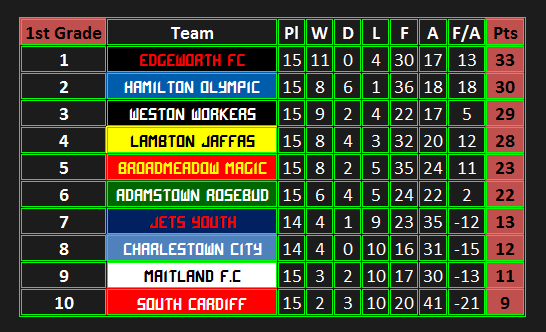 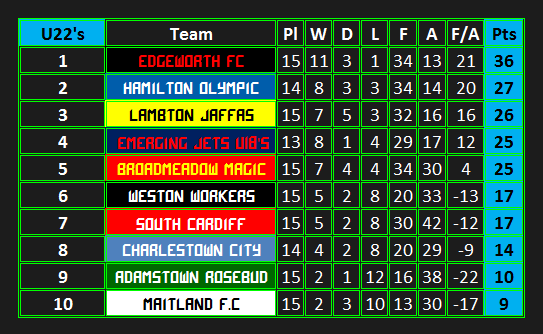 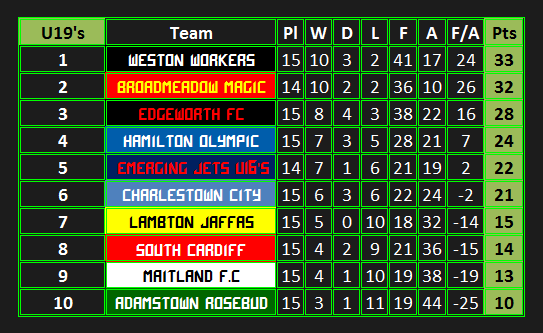