In all my infinite wisdom I got the scores the wrong way round on the graphic above. The Under 17's finished 3-1 to Wallsend and the 19's finished 3-0 to Valentine.

It was a key win for Valentine as well as it lifts them above Belmont-Swansea on the league table with both teams to face each other next week if memory serves correctly. Whichever team wins the minor premiership will no doubt deserve it as these sides have been consistent all season. Valentine will no doubt have enjoyed last night after being smashed off the park by Lakes on the weekend.

Wallsend's 17's kept their good form in tact with a 3-1 victory over lower mid-table side Valentine Phoenix. Goals to Nick Hagan, Taylor Hepburn and Chris Stefoulis were enough to give the Red Devils a victory that takes them closer to third-placed a Cooks Hill United. Thanks to one of Wallsend's injured players for sending through the results and goal scorers. 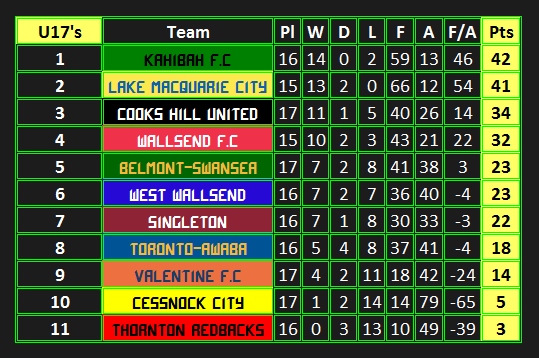