Promotion-chasing Lake Macquarie City were too good for a game Cooks Hill side on Saturday afternoon. To be honest, I thought the home side gifted Lakes the second goal and at the end of the day, you simply can't afford to give a team like Lakes any chances.

The third goal was a classy one but I didn't manage to get goalscorers yesterday. I'll try and find out some names and might update this review in the next day or so if I do. Anyway it was a decent enough win for Lakes and a very important one as well as it keeps them in firm contention for promotion.

Let me say I don't really care who gets promoted, I've had good communication with both clubs and would be delighted to see either reach the top pinnacle of Northern NSW Football. I'm really impressed with Lakes though. Across the day at Cooks Hill they looked like a strong club with good values. The warm-ups looked professional and the 1st graders even did a cool-down after the game. That doesn't win promotion but it helps build a foundation I believe.

Not saying Valentine don't look like a strong club because they certainly do and it's proven by the fact that they're up to their necks in the race for promotion. I may consider leaving the Toronto v Cookers game earlier next week to catch first grade at Macquarie Field. It should be a cracker.

Anyway, I missed the 23's and most of the 19's but both of those games ended in stalemates. A decent result for the Cookers 23's and a very decent one for the 19's in what was essentially a finals warm-up.

And after waiting all season, I finally got to see Lakes' 17's played and they certainly lived up to their premiership-favourites tag as they ran out 4-0 winners over Cooks Hill. I thought the Cookers missed one or two chances early and were made to pay. It was 3-0 at half-time and probably should have been more. To be fair, Cooks Hill put in a better effort in the second half but they weren't good enough on the day against an impressive Lakes outfit.

It was yet another tough day at the office for the freefalling Bluebells as they went down to promotion-chasing Valentine F.C 5-0 at Cahill Oval. As mentioned in my preview, West Wallsend's season really took a downturn when they lost 6-0 at home to the Phoenix and on Saturday, it was a case of what comes around goes around as Westy once again fell to the class of the Phoenix.

Valentine are not letting Lakes get the advantage in the race for promotion and this win keeps the Phoenix on top, albeit with Lakes having an extra catch-up game to play. Next week's clash between Lakes and Valentine will go a long way towards determining which of those sides play NPL football next season. In my opinion Wallsend are out of the race for the title, although mathematically they are still a chance.

In the lower grades, West Wallsend were blown off the park by top of the table Valentine in the Under 23's with the Phoenix running out 8-0 winners. It was a closer affair in the Under 19's as Valentine came away with a 4-2 win whilst serial goalscorer Josh Knight scored twice to help West Wallsend pick up their only win of the day in the Under 17's.

The Singleton Strikers fired themselves to back-to-back wins when they beat Kahibah 2-0 in their transferred home match at Kahibah Oval. The boys from Singo are unpredictable and on their day can trouble the top sides. They proved this again by defeating Kahibah who fall to a second-straight loss on their home turf.

If Kahibah can't start winning, and their next game is a tough one against Lakes, then they'll need to not only worry about Belmont-Swansea, who've taken their top four spot, but also Singleton who are on a rise up the table and only five points adrift of Kahibah.

In the lower grades, Kahibah's Under 23's kept in touch with the top four with a 3-1 win and with a game against fourth-placed Thornton next week, the Green and Blacks are still well and truly alive in the race for finals football. The 19's match ended with a 1-1 draw, a result that favours Singleton a lot more than Kahibah, who's finals hopes are almost certainly now gone.

The Under 17's finished with Kahibah winning 2-0, a result that keeps them in front of Lakes at the top of the table, although with Lakes still with a catch-up game up their sleeve.

Toronto-Awaba's fight to avoid the wooden spoon took a bit of a dent when the Thornton Redbacks left Lyall Peacock Oval with all three points. A red card to the home side proved costly and the visitors would be the victors at the end of the day. Thornton now move clear of the bottom few teams and move a step away from the wooden spoon.

Cessnock's Old Boy's Day ended in a stalemate which neither side would have wanted but both will take on what was a very windy day. No doubt it would have been cold up at Turner Park. Cessnock remain bottom but will be eyeing off next week's clash with West Wallsend as a chance to move away from last spot.

With the point gained today, Belmont-Swansea now move into the top four at the expense of Kahibah. A deserved position for a team that have had a very strong second half of the season so far. A bye next week will no doubt be enjoyed before focus will turn on staging a decent end to the season and maybe an appearance in the finals series.

In the 23's, Cessnock ran out 4-1 winners, a result that really damages the Belswans top four hopes. It was better news for the visitors in the lower grades with the top of the table Under 19's winning 3-0 and the Under 17's winning 4-0. 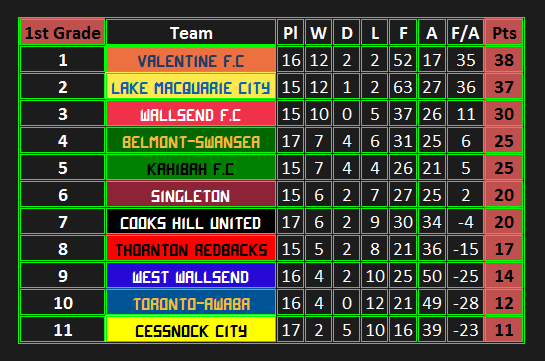 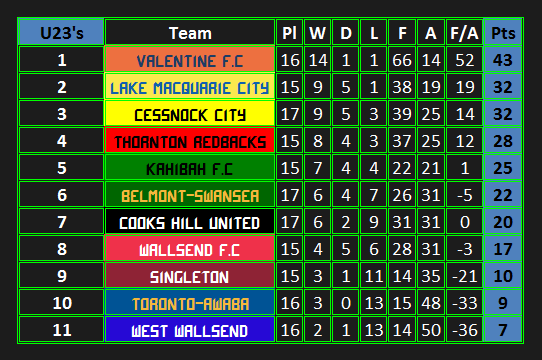 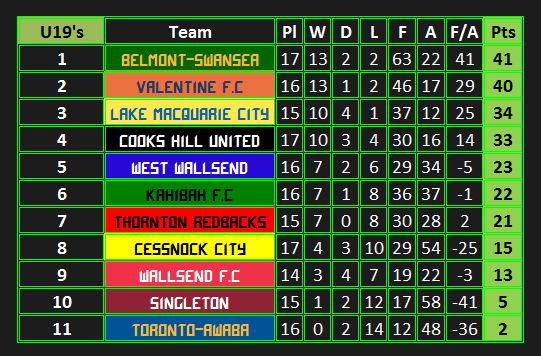 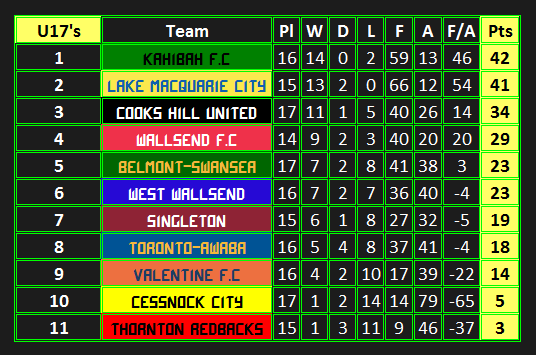