What a night it was on the opening night of the FFA Cup. It was very exciting in the build-up to Magic's cup tie with Victorian NPL powerhouse Heidelberg United. The stage was set for a big-time match and the game didn't let down, although it was disappointing to see Magic get blown off the park in a very lopsided first half. The Warriors of Heidelberg were far too classy in the opening forty five minutes.

Magic gave it their absolute very best shot in the second stanza and were unlucky not to find the net one or two more times throughout the half. Still, it was a second-straight Round of 32 exit for Broadmeadow whilst Heidelberg move on to the Round of 16 in their first FFA Cup campaign.

A big shoutout to the 1342 people that braved cold conditions to make it to Magic Park and provide an atmosphere I've yet to see at any Magic NPL match this year. It'd be great to see more of those faces I saw last night make it to more regular match-ups.

The live Fox Sports match lived up to the hype and I caught the thrilling penalty shootout when I got home. A youthful-Palm Beach outfit survived against former-NSL powerhouse South Melbourne and stunned the much more fancied Victorians in the penalty shootout.

It was great to see the emotion shown by Palm Beach in what had to be arguably the biggest win in the club's history. Who knows what could happen in the Round of 16 for the Sharks. After all the pre-game hype surrounding South Melbourne, one could certainly argue that they let themselves down. I don't want to use the 'chokers' tag but South Melbourne talked a big game and didn't win the big game. Make what you will of that.

Hume City and the Brisbane Strikers put on the match of the night as they played out a thrilling 7-goal, 120 minutes of pure action. I suggest you look up the highlights for this one as it was crazy. Hume won in the very last minute of extra time with an own goal. You couldn't write a script as good as last night's game.

Last but certainly not least was the North Eastern Metrostars thrilling come-from-behind win over the much-more fancied Blacktown City. The Demons came into the game without a loss since April 26th but as always, cup competition is a whole different story to the normal league matches. The Metrostars refused to give in and scored a huge away win.

It was a key victory for Kahibah F.C last night as they secured a 2-0 win over the Thornton Redbacks. The Green and Blacks now take a four point advantage in the race for finals with just two games remaining. A win in either of their remaining games against Wallsend and Lakes would secure a finals berth but it certainly won't be easy.

Thornton's finals hopes are now over but they can still jump Cooks Hill with a win in either of their remaining two fixtures, depending on the Cookers' result on Sunday against West Wallsend. 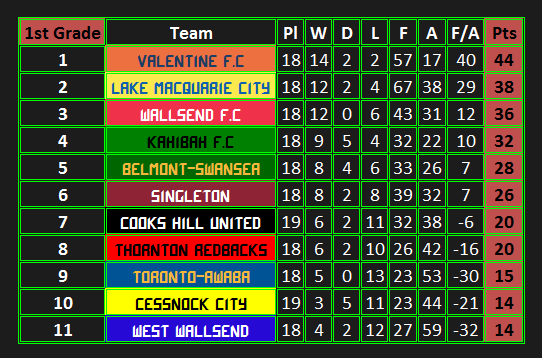