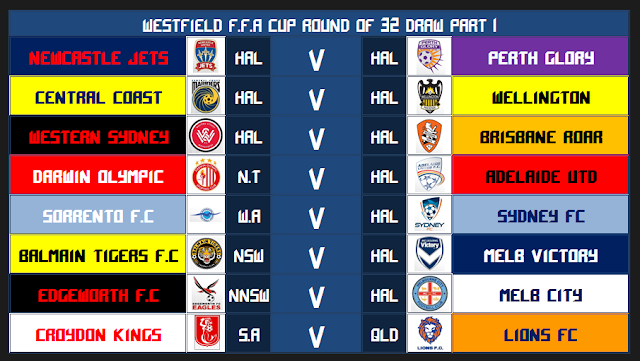 Correct me if I'm wrong but this seems to be the only Round of 32 rematch from last season. The Jets went down that night at Broadmeadow Magic's home ground and this time round the A-League strugglers will be hoping to start their competitive season with a bang.

New coach Scott Miller now knows his first challenge as Jets' mentor and with the former Fulham man arriving next week, chances are the Jets will be fired up for this one and for the chance to prove to their fans that 2015/16 will be a brighter period for the club.

Perth Glory flew very high last season (including an FFA Cup Final appearance) but were very forcefully and rapidly grounded by the turmoil surrounding the club's salary cap breaches. Glory fans deserve better than what they copped last season and they too will be aiming to start 2015/16 with a bang. This will be an interesting match up in the Round of 32.

Now having Wellington Phoenix play in the FFA Cup is not something I personally am a fan of but they're there nonetheless and they'll be looking to pick up a win at Gosford in a month or so's time. The Mariners underachieved by their standards last season and will be looking to start their competitive fixtures in style this time round.

Wellington won't be easy beats and will provide very stiff opposition for the Tuggerah-based A-League side. I say Tuggerah-based as I personally believe the Mariners should and probably will move this game to Pluim Park as it's not exactly going to fill the already expensive to rent Central Coast Stadium.

In what is essentially a dress rehearsal for Round 1 of the Hyundai A-League, albeit two months early, the Wanderers and Roar will both be looking to turn around poor seasons last year straight away this time round. The Wanderers especially I thought were disappointingly domestically. Sure they won the Asian Champions League but it came with a heavy toll in their league form.

After being stunned by little-known midfielder Thomas Love and Adelaide City, the Wanderers will be looking to pass the first hurdle of the FFA Cup this season. Brisbane have major issues financially at the moment but they've got some decent youngsters coming through (the likes of Devante Clut and Lachlan Jackson) and if they can fire, they'll be able to win this one. This in my opinion will be the match of the round between the three all A-League games.

Well the Northern Territory have an FFA Cup spot this year and it's paid dividends straight away with 2nd-placed NorZone Premier League side Darwin Olympic drawing the inaugural FFA Cup winners' Adelaide United at home. An amazing fixture for the Darwin-based side.

I'm not sure about the lighting quality at the ground but looking at photos, Olympic's home ground Darwin Football Stadium looks more than good enough to host a fixture like this and maybe even the cameras and trucks of Fox Sports too. The Reds are sponsored by the Northern Territory travel board/government so this works out all round.

The first thing I thought about when I saw this fixture was the fact that Sydney F.C will most likely need a change of shirt. Seriously though this is a big score for the Jamie Harnwell-coached Sorrento F.C. Looking at photos their ground isn't really up to the standard needed to host a game of this caliber so it wouldn't surprise me to see it moved to the W.A Athletics Ground that was used last year by Bayswater City. This'll be a big chance for the Sorrento boys to star on possible national television against the very best.

I was hoping Victory would be drawn away to Edgeworth as I love watching the defending A-League champions strut their stuff in person but this is a massive, massive coup for everyone involved with the Balmain Tigers Football Club. When people think of the Balmain Tigers they of course think of the historic NRL club but this is a chance for these Tigers to put their name out there.

The Tigers play in the third-tier of NSW football and to draw the champions of Australia at home is not to be underestimated. This is a huge achievement for the club. Their home ground of Wentworth Park is good enough to host NSW's premier greyhound events so why not Fox Sports as well. Either way this is a big opportunity and in all honesty the Tigers will most likely be put to the slaughter but it's one to write in the history books that's for sure.

I was hoping for Broadmeadow Magic to draw an A-League side but this is the next best thing. Edgeworth I've seen play three times in the past week and a half and they've got a quality squad. Their brand of football has improved this season and sitting second in the Northern NSW NPL is fully deserved.

Drawing Melbourne City at home is quiet possibly the biggest thing to happen to the Edgeworth Football Club in recent memory and I'm certain I heard they were looking at temporary lighting options if the cameras of Fox Sports and the 1200 lux requirements came knocking at Jack McLaughlan Oval.

This game won't be the same if it's not played at Edgeworth's home ground. They deserve it and I really hope they can sort something out with lighting and host the game. I'm sure the entire suburb of Edgeworth will remember the night the richest team in Australia came to their backyard. Congrats to the Eagles for pulling off a big coup in the FFA Cup draw.

The fourth-placed South Australian NPL side Croydon Kings will host top of the table Brisbane Premier League side Lions F.C. The defending NPL SA champions have a proud history since their founding by Polish migrants in 1950. Lions FC come from a Dutch background and were actually the original incarnation of A-League powerhouse Brisbane Roar (hence the orange that the Roar still wear). This will be an interesting clash but one Croydon will be expected to win at home. Nothing's guaranteed in cup football though (just ask Chelsea about their Bradford City game!)