The Wrap-Up (Zone Premier League Round 11)

The top four had a major reshuffle over the course of the last few days in the Zone Premier League. The biggest win of the weekend came at Ray Watt Oval as the University demolished Barnsley 8-1. The Bulldogs' have struggled this season and Saturday was one of their toughest days yet. Credit to Uni though who cement a top four spot with the win and boost their goal difference.

Top of the table Beresfield United remained undefeated and recorded their seventh win of the season, winning 5-2 at Swansea. the high-flying Eagles will be delighted with the result in the Garden Suburb v Mayfield game and will know that they are favourites for some silverware this season. Not a good result for Swansea though as they missed a glorious chance to gain some ground on the top four.

In the upset of the round, Garden Suburb pulled off the unthinkable and defeated last season's Grand Finalists Mayfield United. The loss costs Mayfield hugely as they now drop to fourth and only New Lambton's shock loss prevented the Tigers from falling out of the top four. The Kingfishers now move five clear of Barnsley at the bottom of the table with this impressive win.

As mentioned, New Lambton were handed a shock loss as well, going down to the Newcastle Suns. The Eagles are now out of the top four and looking a very slim chance of defending their minor premiership from last season. The Suns though boosted their finals hopes and with a big run at the back end of the season, the team from Connolly Park could still make finals.

The Suns however lost their mid-week game against Cardiff City 5-3. With this win and the gutsy 1-0 win over Dudley-Redhead on the weekend, the Tigers suddenly find themselves in second-place, albeit with an extra game played over the University. Still, Cardiff's form is starting to come together and it couldn't happen at a better time with some of the other top four sides faltering this weekend. 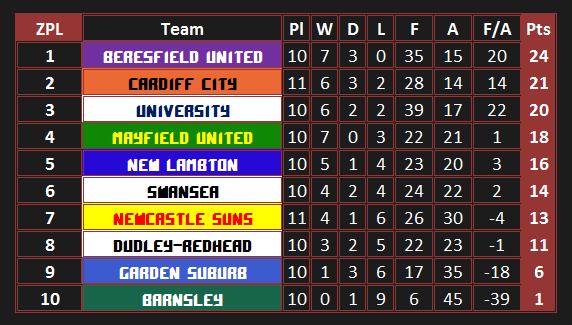 The Wrap-Up (Zone League One Round 11)

Warners Bay dumped the Stockton Sharks out of the top four with their 2-1 win on Saturday. It was some revenge for the Panthers who lost to Stockton back in Round 2. With a victory over Morisset under their belts, Warners Bay are definitely still a chance of winning the minor premiership.

In the shock of the round, Westlakes Wildcats upset a depleted Cooks Hill United side. I say depleted because Cooks Hill were missing a few players but with the depth they have it's still a massive victory for the Wildcats. Westlakes scored as many goals on Saturday as they had in nine previous games this season. Congrats on the big scalp of the current ladder-leaders.

Jesmond F.C I've been told were somewhat lucky to escape with a win over Beresfield F.C in what I've also been told was a scrappy game played on a fairly heavy pitch. The Rams though won't care about the score only the win as it lifts them into third place.

Kotara South won an eight-goal thriller last time they met Nelson Bay and this time round they won in a ten-goal thriller. The Bay were gallant and managed to bag four goals, their best single-game haul of the season but it still wasn't enough to down a Kotara South side that desperately needed the three points.

In another fairly major upset, previously ladder-leaders Morisset United were held to a thrilling 4-4 draw by 7th-placed Charlestown. The Hammers didn't back down from their much more fancied opponents and gained a very decent point. Still they would have wanted a win as they still remain a fair way out of the top four. 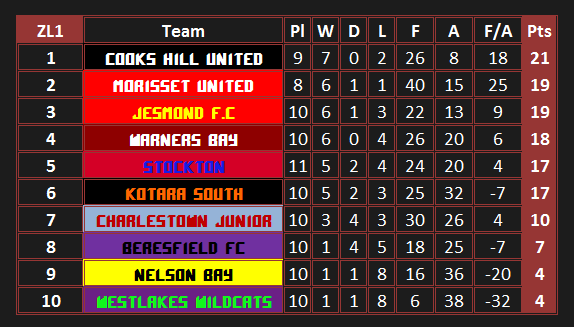 The Wrap-Up (Zone League Two Round 11)

If anyone wanted to question Raymond Terrace's spot on the top of the table then they definitely don't have a leg to stand on now after the Rangers defeated local rivals Medowie 8-1 at King Park. Medowie had been in some decent form as of late but they were no match for the ladder-leaders. Raymond Terrace are the form side of the comp and are averaging over four goals a game.

At long last and after coming close on a couple of previous occasions, the Tenambit Sharks have picked up their first win of the 2015 season, a 1-0 win over Maryland-Fletcher. The Sharks should be very pleased with this one as the Bulldogs were coming off a decent win over Kurri mid-week.

Talking about Kurri, their match with 3rd-placed University was postponed. Not a good result for a Uni side that already have a few games to catch-up on. In yet another Zone League shocker, Hunter Simba were downed 2-1 at Jesmond Park by Merewether Advance. Last time the sides met, Simba hammered Merewether but it was some sweet revenge this time round for Advance.

Muswellbrook were no match for 2nd-placed Hamilton Olympic, going down 7-0 on their home turf however the Eagles did manage to pick up a mid-week win over Tenambit, a result that lifted them above Kurri Kurri on the table. Kurri themselves played mid-week and went down 4-1 to Maryland-Fletcher. 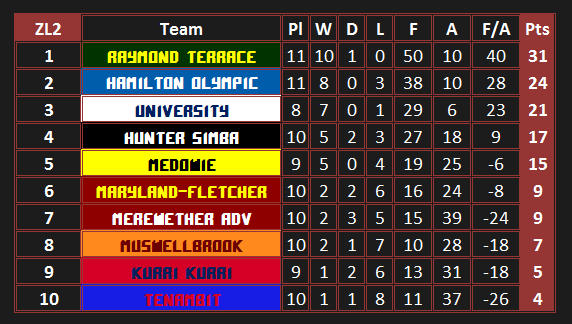 The Wrap-Up (Zone League Three Round 11)

In ZL3, New Lambton FC picked up their biggest win of the season, stunning top of the table Dudley-Redhead 3-0 at Alder Park. It was a convincing win for New Lambton and one that will make Dudley think twice about their minor premiership hopes.

I correctly predicted Mayfield to go down 7-0 and knew it'd be a tough ask for the out of form Tigers to down Kahibah. The Green and Blacks were a too good on the day and kept their top four spot alive with the big win.

Games at Edgeworth (v RAAF Williamtown) and Jesmond (v Abermain) were both postponed. On Sunday, Mayfield United bounced back from that 7-0 loss to record their long-awaited first win of the season, a 1-0 win over Abermain. It was a decent win for the Tigers and one that lifts them above the Abermain Rams on the table. This doesn't seem to be a good year for either of the Rams' sides in ZL3 with Abermain and Jesmond rounding out the table.

In Sunday's other catch-up game, the RAAF side destroyed Jesmond F.C 10-0 at Tomaree. I don't normally use the word 'destroyed' but there's not too many other adjectives I could use here. I'm sure there's more to the result (Jesmond missing players, red cards, etc.) but without any news from the game I can't really comment. A massive win for the RAAF though. 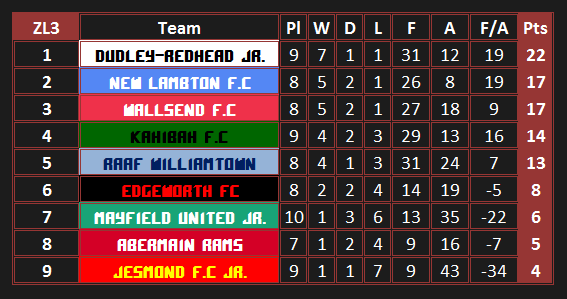