The New Lambton Eagles bounced back from a defeat last week as they overcame Dudley-Redhead 3-2 at home. The visitors were up 2-0 at half-time but were ultimately unable to get anything out of this one at Alder Park. It was a timely victory for the Eagles as it keeps their top four spot alive.

In the derby between Cardiff City and Garden Suburb the Tigers stepped up and put a 4-2 defeat on their rivals on their club's Ladies Day. The Kingfishers are still winless but will no doubt be happier to go down 4-2 than their horror defeat at the University last week. The Tigers are now just one point outside the top four.

The University ZPL side have lost just twice this season and both of those losses were against Mayfield United. The Tigers (since when were Tigers green and white or green and yellow in the case of this team). Anyway the 2014 Grand Finalists got over the line in a tight contest at Ray Watt Oval.

Barnsley remained winless as they went down 2-1 to Swansea FC. The Swans are just two points outside the top four with these win. It certainly went better for the Bulldogs than it did when they last played Swansea back in Round 1.

In Sunday's match, Beresfield United had to do it the hard way to overcome a spirited Newcastle Suns side. The visitors played with ten men for a large portion of the game and came agonisingly close to getting a result but the Eagles would get over the line in the last few minutes. A good result for the ladder-leaders in what was Danny Burt's 100th game for the purple and white. 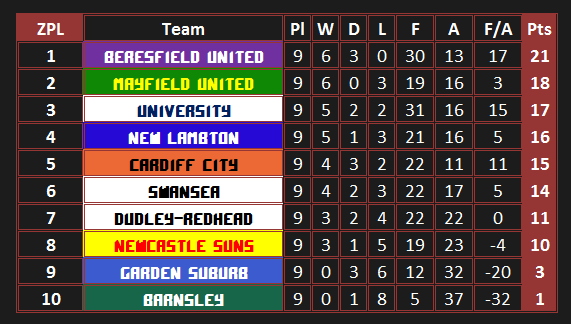 Beresfield FC came close but were unable to pick up a win against rivals Stockton at Corroba Oval. A Dan Ebert penalty opened the scoring for the home side but the away side would hit back not too long after. Nick Humble headed home to put the Sharks back in front going into the break. In the second period, Bronson Marshall scored a stunner off a bicycle kick. Bero scored another but it wasn't enough as they fell to the Sharks for the second time this season.

By the way, Stockton do great match reports and what not on each and every game they play so if you're interested check them out on Facebook:

The Westlakes Wildcats haven't had the best season this year and their poor form continued against Jesmond on Saturday, going down 3-0 to the Rams. It's a decent result for Jesmond that leaves them two points outside the top four going into their huge FFA Cup clash with West Wallsend next Saturday.

Cooks Hill United moved equal top of the table with a 3-1 victory on the road at Nelson Bay. The Cookers won 4-1 back in the opening round and completed the double over the Bay with this win.

Charlestown and Kotara South couldn't be split as they drew their Round 10 match 2-2. The Tigers scored one of their goals from the spot and lost their spot in the top four as a result of not winning this one. Still, a decent result for both sides but one both would have rather win.

On Sunday, Warners Bay picked up the upset of the round with a 4-2 win over previously unbeaten Morisset United. I'm not sure how it went down but it's a big win for the Panthers and moves them into the top four. Morisset will need to regroup quickly or face losing top spot to Cooks Hill. There's still a small matter of the catch-up game with Cooks Hill to deal with as well. 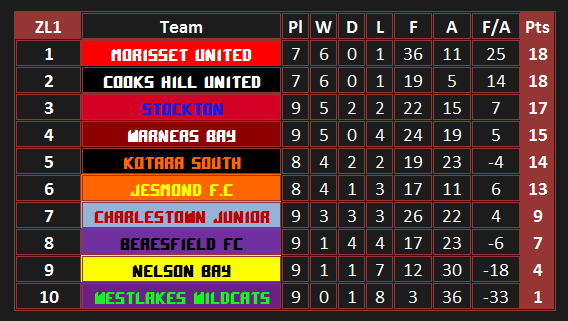 University were far too classy on Saturday for the visiting Tenambit Sharks and put a sword to the struggling Sharks with a comprehensive 6-0 victory.

Hunter Simba recorded a big home win over Kurri Kurri, winning 4-1 and keeping their spot inside the top four alive.

Medowie got the job done in style against Muswellbrook. After copping four at the hands of the Eagles back in Round 1, Medowie got the ultimate revenge by winning the return leg 4-1.

No surprise to see Hamilton win 4-0 against Merewether Advance. Olympic will certainly want to keep within four points of ladder-leading Raymond Terrace or risk seeing their premiership chances slip away. Not good news for Merewether as they're now sitting 12 points away from the top four.

In the final result of the round, Raymond Terrace might not have done it easily but the ladder-leaders won their away match against Maryland-Fletcher. The Bulldogs should hold their heads high for taking it to the Lions but at the end of the day, the Terrace proved that they are prepared to win tight games. 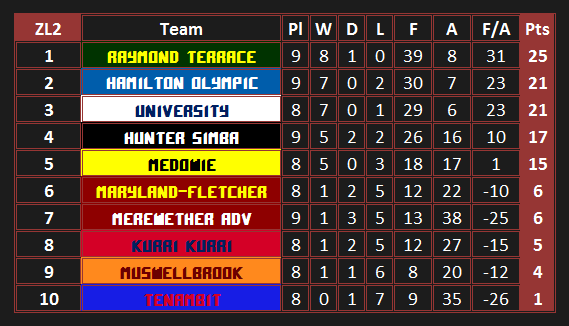 Kahibah and Wallsend drew their top four clash 1-1 at Kahibah Oval. Not much else to say about this one. Wallsend will be disappointed to see the gap between top of the table Dudley and themselves stretch out.

Talking about Dudley, they picked up a dominant 8-0 victory over struggling Jesmond FC. The ladder-leaders stretched their lead atop the table to five points and look the goods going into the back half of the season.

Abermain picked up a long awaited victory as they held on for a 3-2 win against Edgeworth. The Rams have picked up two draws this year and proven that they aren't easybeats. A push towards the finals is certainly not out of the picture just yet as they have a couple of catch-up games in hand.

Last but not least, New Lambton FC rocketed to a 7-1 away win over lowly Mayfield United. The Tigers remain rooted to the bottom of the table whilst New Lambton push their way further into the top four.

Whilst on the the topic of New Lambton, I got a message from one of their guys and it was a really kind one at that. It makes it worth while when praise comes through. Anyway the New Lambton ZL3 boys have a very well set-up Facebook page and do reviews for all their matches as well as some photos. Feel free to have a look at the link below. Good job boys! Wish more teams would do this sort of stuff, even in the higher comps like NPL and New-FM. 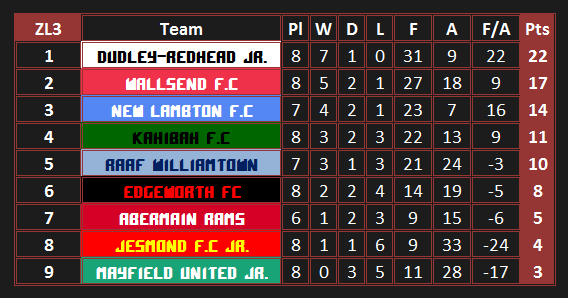