Top of the table Broadmeadow proved themselves as minor premiership contenders with a commanding 6-0 victory over arch rivals Hamilton Olympic in their transferred match-up at New-FM side Belmont-Swansea's home ground, Blacksmiths Oval. The win is Magic's 11th of the season and takes their goal difference to 50 for and 8 against.

In the last game of the round, South Cardiff's Under 13's broke their winless drought with an impressive 4-1 win over fellow strugglers Lambton Jaffas. The Gunners now move away from the bottom of the table and leave Lambton behind in the process. The game between Edgeworth and the Under 12 Emerging Jets was postponed. 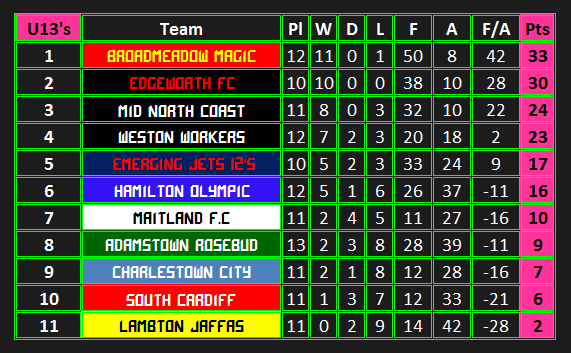 The top of the table is tight in the Under 14's after Round 16. Broadmeadow kicked things off by stealing top spot on the table and beating rivals Hamilton Olympic 4-1 at Blacksmiths. With Adamstown losing their match, Magic now sit atop the table on goal differential.

In one of the more impressive wins in any NPL Youth grade this weekend, Weston defeated their local rivals Maitland F.C 5-0 at Rockwell Automation Park. It was only the second win of the year for the young Bears and avenged a 1-1 draw with the Magpies earlier in the season.

As mentioned, top of the table Adamstown were beaten but it certainly wasn't a game where they were beaten heavily with Mid North Coast hanging on for a gutsy 1-0 result. The boys from up north now take a share of top spot along with the Rosebuds and Magic.

In the final result of the round, the Lambton Jaffas Under 14's picked up their first point of the season, drawing 1-1 with South Cardiff. No it wasn't a win but it at least gets the Jaffas off of that horrible 0 in the points tally. Edgeworth v Emerging Jets was postponed. 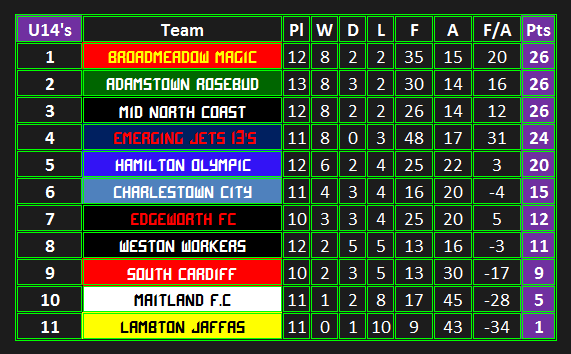 The Match of the Round between top of the table Broadmeadow and Hamilton ended in an entertaining 2-2 draw, proving the sides are very well matched and providing what some will think is a possible prelude to the Grand Final if both sides keep travelling the way their going.

Of course Charlestown and Weston may have something to say about that Grand Final statement, especially after the Bears' 15's saw off Maitland 5-2 at Rockwell Automation Park. With Adamstown dropping points, the Bears cemented a spot in the top four with the impressive win.

As mentioned Adamstown dropped two vital points in their disappointing scoreless draw with the Mid North Coast. After seeing off the team from up north 3-0 away from home, the Rosebud 15's were unable to break the deadlock and secure a fifth win of the season, instead it was a fifth draw.

In the final match of the round, South Cardiff were supreme in the bottom-of-the-table clash with the Lambton Jaffas. The Gunners have the wood over the Jaffas this season, winning both games. A very important win when it comes to who might finish with the spoon this season. As with the other grades, Edgeworth v the Emerging Jets was called off. 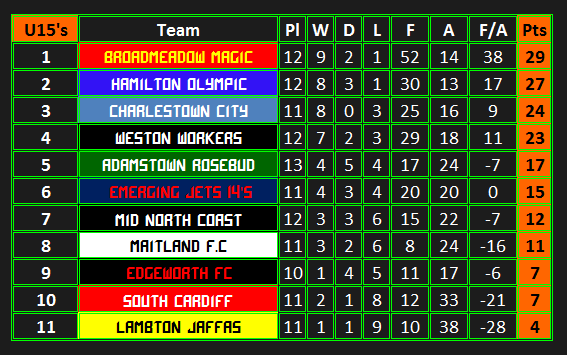 In the 17's, Hamilton Olympic pulled off a hugely important victory at Blacksmiths Oval, downing arch rivals Broadmeadow Magic 2-0 and taking over at the top of the table. Olympic avenged their loss to Broadmeadow earlier in the season and sent Magic crashing down to third position.

Olympic are on top on points differential but the Weston Bears are certainly right on their tail. The Bears 17's wrapped up what was a superb day at the office for the home side, downing Maitland 3-1 and completing a clean sheet of victories against the local rivals. Another tough loss for Maitland's 17's who are now the lone NPL Youth side without a point this season.

The crunch mid-table match between Adamstown and the Mid North Coast ended with the visitors taking all three points in a 2-1 victory. I correctly tipped the 2-1 scoreline and it definitely makes things interesting in the race for finals football.

Lambton moved 6 points clear of last place with a 2-1 win over South Cardiff at Ulinga Oval. The Jaffas avenged a loss by the same scoreline at Arthur Edden Oval earlier this season. Edgeworth v the Emerging Jets was called off. 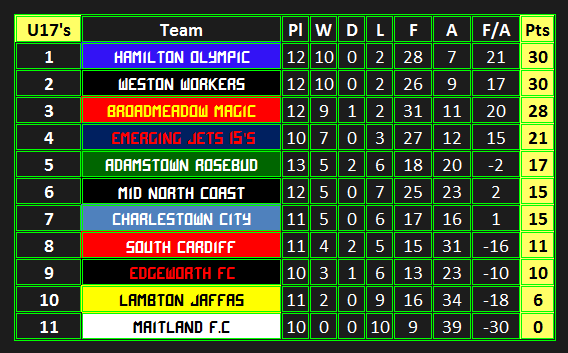