Edgeworth kept their perfect season record in tact with a ninth win from nine starts as they recorded a 3-1 home win over mid-table Hamilton Olympic. Football Mid North Coast made the long trip down to Whitebridge and came out 4-1 winners, boosting their spot inside the top four in the process.

No surprise in the first versus last clash as Broadmeadow defeated Lambton 3-0 in Sunday's transferred fixture at Connolly Park, Carrington. Weston pulled off a gutsy away win at Adamstown whilst finally, Maitland overcame South Cardiff 3-2 at Ulinga Oval. Hamilton pulled off a crucial away win at Edgeworth as they held on for a 3-2 win over the Eagles in a result that pushes Hamilton closer to the top four. At Lisle Carr Oval Mid North Coast got over the line in a five-goal thriller with Charlestown City.

On Sunday, Magic were too strong for Lambton in a 2-0 win. Whilst it wasn't a win, it's a decent result for the Jaffas as they've been on the end of some lofty scorelines in 2015. Losing 2-0 to Magic is not by any means a bad defeat. Top of the table Adamstown did it the hard way against Weston whilst Maitland stunned South Cardiff 4-0 at Ulinga Oval. It was the first win this season for the Under 14 Magpies. 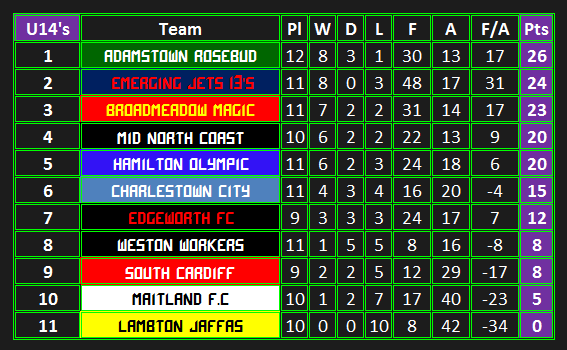 Saturday's games saw Hamilton continue their good form with a 2-0 away win at Edgeworth and Charlestown City pick up a 3-1 win at home to the Mid North Coast.

On Sunday, Broadmeadow Magic showed their class with a whopping 9-2 victory over the Lambton Jaffas. Weston picked up a crucial away win at Adamstown which stretches the gap between the four-placed Bears and fifth-placed Rosebud. South Cardiff remained bottom as they went down 2-1 to Maitland. 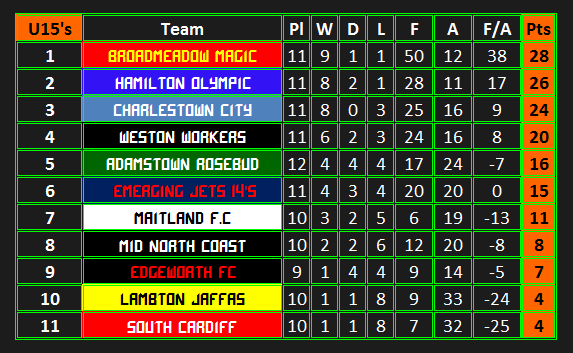 Hamilton kept pressure on Broadmeadow at the top of the table with a 2-0 win at Jack McLaughlan Oval. The loss leaves Edgeworth in 8th position. At Lisle Carr Oval, Charlestown were on the end of a Mid North Coast upset as the boys from up north won their third game of the season.

Sunday's games saw Magic remain top of the table with a classy 4-1 win against Lambton and Weston stay in touch with the top of the table as they pulled off a gutsy 1-0 win at Adamstown Oval. Luckless Maitland came close to securing their first point of the season but ultimately went down 3-2 to South Cardiff. 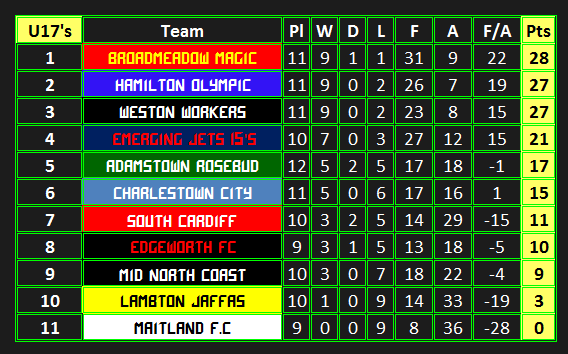