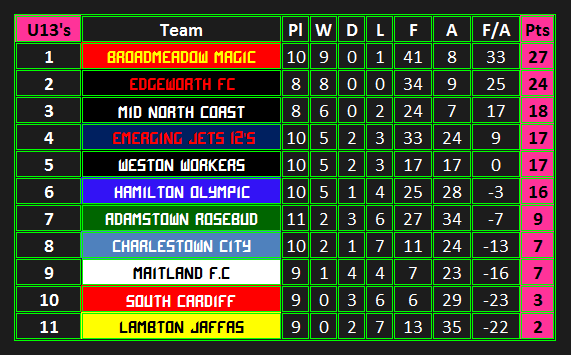 Weston recorded a much needed 3-0 win over South Cardiff at home, moving them into equal fourth. Maitland and Charlestown were unable to be split in a scoreless draw that did neither team any favours on the ladder.

Bottom-placed Lambton were outclassed by the Under 12 Emerging Jets. The Young Jets were ruthless in an 8-2 victory that kept them in fourth place. Top of the table Broadmeadow handed Mid North Coast just their second loss of the season whilst Edgeworth stretched their winning streak to eight with a 3-2 victory over Adamstown on Monday. 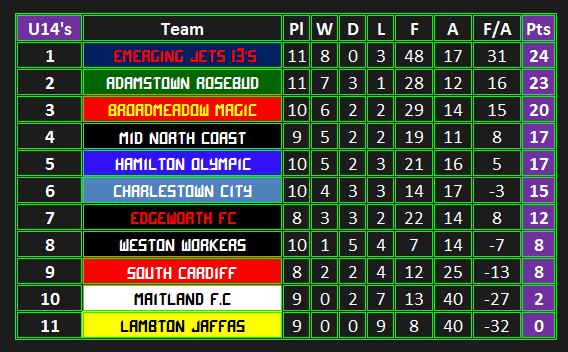 After drawing a total of five games this season, the Weston Bears Under 14's have finally got some luck and picked up their first win of the campaign, with victory over South Cardiff. Mid North Coast picked up a decent result by drawing with Broadmeadow and moving themselves above Hamilton into the top four.

Charlestown City did enough to get over winless Maitland whilst on Monday, Adamstown and Edgeworth couldn't be split with the Buds losing their grip on top spot. The Under 13 Emerging Jets took their chances well and defeated Lambton 5-2 to move into first position on goal difference. 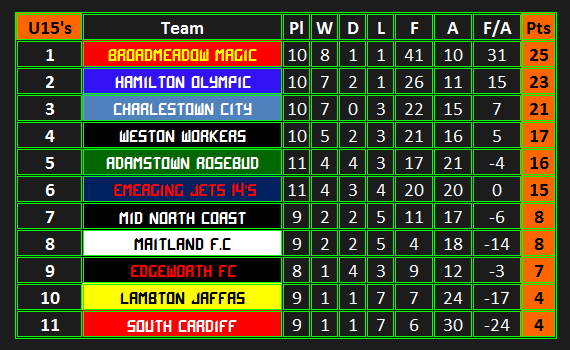 Weston's Under 15's moved into the top four with an impressive 7-0 victory over bottom-placed South Cardiff on Saturday. Also on Saturday, Charlestown continued their good recent form with a 4-1 win at Maitland. The Under 14 Emerging Jets kept touch with the top four by beating Lambton 1-0.

In Sunday's match, Broadmeadow Magic moved into top spot with a 3-1 victory at Taree over Football Mid North Coast. Finally, on Monday, Adamstown and Edgeworth played out a scoreless draw. 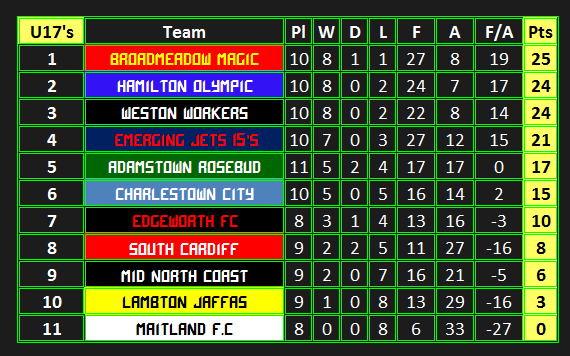 Weston's Under 17's kept in touch with the top of the table by recording a 5-0 win over South Cardiff. Winless Maitland were outdone by Charlestown 4-1 whilst the Under 15 Emerging Jets moved into the top four with a 6-2 victory over Lambton.

Broadmeadow Magic recorded a 2-0 win at Taree to move into top spot whilst on Monday, Adamstown got over the line against Edgeworth 3 goals to 2.