Before I get into my new look Zone Football preview, which may I add may not be a weekly occurrence due to time issues (I'm writing this at 2am in the morning haha). Anyway, the set-up is basic, I do a small preview for each game and then give my tip in a blue text like this ---> (Draw 0-0)

I'm going to try and make the Zone previews a bit less serious than the New-FM and NPL ones. Just a quick word and a stat or two, really simple stuff. So please spread the word and if you can feel free to message through results and what not each week as it's often hard to find them.

Apologies to those playing Reserves and Third grade but I don't have the time to cover those grades at the moment.

It wasn't the best of days for New Lambton in their Round 1 loss to Dudley-Redhead and the Eagles aren't hitting the premiership-winning heights of 2014 so far this season. They lost their mid-week game against the Uni and will see their top four spot slip away with a loss here. Dudley are no easybeats and have proven themselves in recent weeks as a decent side. I like the draw here. (Draw 2-2)

Garden Suburb's season hasn't hit any great heights just yet and last week's 11-1 loss to the University is probably going to be the low point of the season as it simply doesn't get any worse. To be fair the Kingfishers were down to nine men but still they'll know they can do so much better and what better time to do it than the local derby.

These sides drew their Round 1 clash but I'm giving Cardiff the edge here. The Tigers won at New Lambton last week and will want to inflict more pain on their rivals on Saturday.  (Cardiff 3-1)

Looking back at Round 1, Mayfield United beat the Uni 7-2. Obviously things have changed since then and the Students currently sit above the Tigers on the table. This is a very crucial game in the race for the minor premiership and neither will want to lose. That's why I'm going down the middle and tipping the draw, despite the fact Mayfield lost disappointingly last week. (Draw 1-1)

Barnsley got hit for five back in Round 1 against Swansea and conceding goals has been a big issue for the Bulldogs in 2015. To their credit, they took the fight to the Suns last week but I honestly can't see them getting anything out of this one. That 5-0 scoreline could happen again against a Swansea side that downed a decent Mayfield side 3-0 last week (Swansea 5-0)

This Beresfield side are the real deal and could very well be next in line for a promotion to the New-FM 1st Division depending on ground issues and what not. Their form says that they're a serious football side and without doubt, the best in this competition so far. The Uni are breathing on the back of their necks though so a win at home on Sunday is crucial. (Beresfield 3-1) 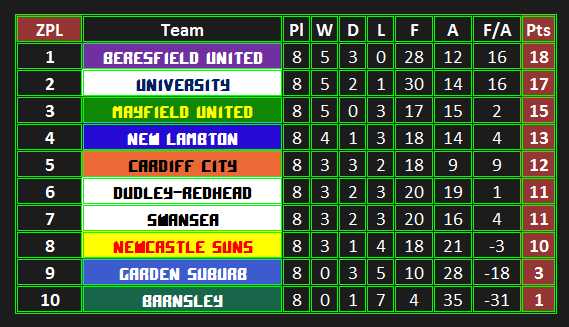 The Westlakes Wildcats have endured the season from hell so far. They've ony found the net three times in eight games and have conceded 33 in that same time. Jesmond put four past Nelson Bay last week and only a complete madman would tip against them here. (Jesmond 4-0)

*On a quick note, Jesmond will be intent on picking up a big win this weekend before they face their biggest test of the season next week in the FFA Cup clash with West Wallsend. After stunning New-FM side Toronto-Awaba in Round 2, the Rams will go into next week believing anything is possible. All FFA Cup previews will be up on Newysports next week by the way.

Playing the Stockton Sharks at Corroba Oval is never an easy proposition. Playing them when they're coming off a 5-1 home win makes it even harder. Beresfield though did in fact pick up their first win of the season last week, stunning Warners Bay 4-0. I'm not sure what happened in that one last week but I'm still not sold on Beresfield's chances here. (Stockton 3-1)

Nelson Bay were on the end of a 4-1 beating last time they met Cooks Hill and they were beaten by the same score last week against Jesmond. I think the Cookers are the team to beat here and whilst 4-1 is in my head, let's make that the tip! (Cooks Hill 4-1)

Kotara South met the full force of ladder-leaders Morisset least week and were smacked 8-0 at home! Charlestown on the other hand were outdone 2-0 by Cooks Hill. The Hammers though aren't exactly a pushover at the moment and won their last home game 5-2 against Jesmond. I might go for the draw here. (Draw 2-2)

If they play like they have in a couple of decent wins this year, Warners Bay could have a chance of troubling Morisset but if they play like they did in their shock loss to Beresfield last week, they could be on the end of a cricket score. Morisset are simply too good to back against at the moment and can stretch their winning start to seven on the weekend (Morisset 5-2) 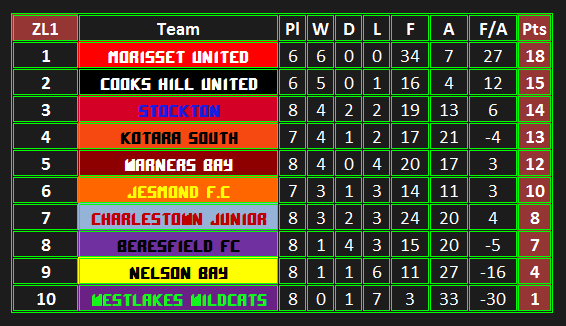 The Tenambit Sharks aren't having the luckiest season in 2015 and won't want to remember their opening home game against the University. This is a tough road trip for the Sharks and one I can see them struggling in. Uni are just in too good of form to back against them. They beat Simba 4-1 last week so that seems to be a recurring scoreline. (University 4-1)

After drawing their Round 1 clash 2-2, these two promoted League Three sides have gone opposite ways on the table. Simba have performed gallantly in their first season in this comp and have lost just the two games whilst Kurri Kurri have only one win to their name. Simba will want to bounce back from a heavy loss to Uni last week. (Hunter Simba 3-1)

Last time these sides met, all the way back in Round 1, Muswellbrook picked up their first and only win of the season, downing Medowie 4-0. The Bees (I think it's a bee on their logo) have been in great form since then and can trouble most sides in this division on their day. I can see Medowie returning the favour from Round 1 here. (Medowie 2-0)

It was an absolute horror show for Merewether on the opening day of the season but to their credit, they've picked up one or two decent results since then. Still, their goals conceded tally isn't pretty and facing a Hamilton side that fired themselves to a 6-1 win last week, it might be a long afternoon at Islington Park for the visitors. (Hamilton Olympic 5-1)

The newly-named Maryland-Fletcher side haven't had too much to celebrate in their first season under their new banner. Their first game of the year was a 6-1 home loss to Raymond Terrace and the Lions have been roaring so far in 2015, with an amazing goal difference of 37 to 7. It's a game that will probably only go one way. (Raymond Terrace 4-1) 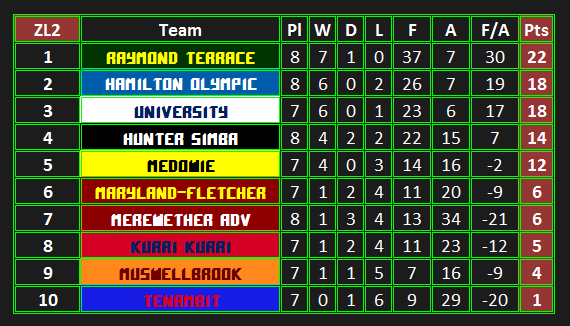 It'll be an entertaining clash between Kahibah and Wallsend on Saturday but it's one I can see the visitors winning. They've seem to have found a winning formula so far this season and whilst Kahibah won't be pushovers, I think the Red Devils can get the points. (Wallsend 2-1)

The ladder-leaders shouldn't find it too hard to beat a team they've already gotten past this season. Last time they played, Dudley won 3-1 on the road and a similar scoreline wouldn't be a surprise here for the undefeated side from Liles Oval. (Dudley-Redhead Jnr. 3-1)

Abermain have just two points from the first half of the season and one of those points came on opening day at Edgeworth. The Rams will be confident after drawing 2-2 with Kahibah last time out, a game I actually played next to. Can the first win of the season come on Saturday, I'm not sure but I'll go with the draw again. (Draw 1-1)

New Lambton got the points back in Round 1 but the Tigers didn't go down easily. The Eagles are travelling nicely in third place and a win here would do them very well. Mayfield are still winless in 2015 and whether this game being at Stevenson Park will help them over the line remains to be seen. New Lambton by two.  (New Lambton 3-1) 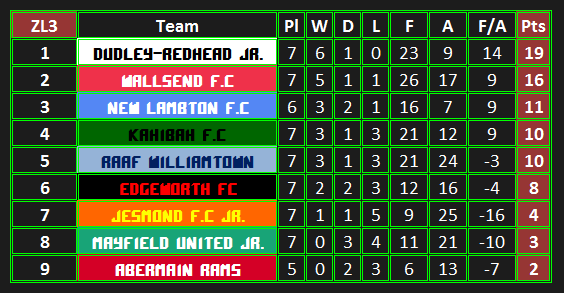