I'm delighted to announce that I've started work as a media man for Broadmeadow Magic FC. I've been a supporter of Magic since I got into the local football scene three years ago and have followed them ever since, despite playing for Cooks Hill United!

The guys at Magic have allowed me access to their team which I am very thankful for and am sure I will enjoy interviewing players, reviewing matches and being around a club that gets bigger by the day. After being on the first ever live Fox Sports FFA Cup match, Broadmeadow are focused on repeating their voyage this year in the national cup and who knows with some luck could draw a Melbourne Victory or the likes.

I will continue to run Newysports and might even link a few of the Magic videos onto the site. Yes you may be able to spot a hint of bias in my previews and reviews of Magic games but to be honest if you haven't noticed that yet, then you probably won't. I support Magic but it's business first and I will try my best to be unbiased in all my Newysports material.

I'm glad to be on board and very thankful for the such kind words from Magic.

Hopefully this'll help me become a better writer and interviewer and who knows I may even start doing interviews for the New-FM competition if anyone's keen enough to get the ball rolling. Thank you and good luck for the weekend, regardless of who you play for and/or support. -Ty 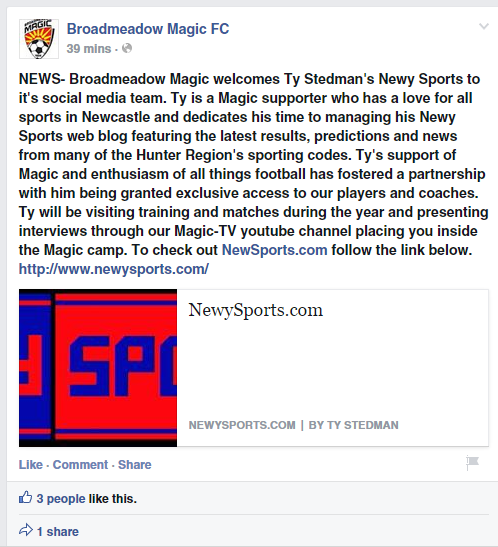