The weekend of NPL Youth action kicked off with a 1-1 draw between Maitland and Hamilton in the Under 13's. The stalemate was a better result for the home side than it was for the visitors as Hamilton missed a chance to keep pressure on the top three.

Hamilton's Under 15's took top spot on the table with a 3-0 victory over mid-table Maitland in their clash on Saturday.

Finally, the visitors were far too good in the Under 17's clash, running out 7-1 winners. The big win puts Hamilton on top of the table and keeps Maitland locked the bottom spot for another week.

Top of the table Edgeworth extended their winning streak to seven with a 4-0 victory in the opening match of the day at Jack McLaughlan Oval. The Eagles' 13's will now look ahead to next week's game against lowly South Cardiff whilst the Jaffas have the bye.

Lambton's Under 14's remained rooted to the bottom of the table as they went down 3-1 to an Edgeworth side that moved to within three points of a top four spot and returned to the winners' circle after a draw last time out.

The visitors got the three points in the Under 15's clash, running out 2-0 winners. The win was Lambton's first of the season in the 15's and it gives them some confidence before next week's bye.

Edgeworth wrapped the day up with a 2-1 victory in the Under 17's clash. The Eagles' got over the line in a result that sees them bounce back from last week's heavy loss.

The two sides sitting 5th and 6th on the Under 13's NPL table couldn't be separated as the Emerging Jets drew 2-2 with visiting Weston at the Speers Point Facility. It's not a result either side were hoping for as they both missed a chance to take a top four spot.

The Emerging Jets 13's took top spot away from Adamstown (with the Buds still to play tomorrow) with a convincing 4-1 victory. The Jets 13's became the first side to crack 40 goals in all four grades with Saturday's victory.

Weston were too good in the Under 15's clash as they put four past the Jets and bounced back from last week's loss.

In the final match of the day, the Under 15 Emerging Jets came out 1-0 winners in a tight contest. The loss was Weston's second in a row after starting the season with six straight victories. The Jets 15's now sit just three points behind the Bears on the league table. 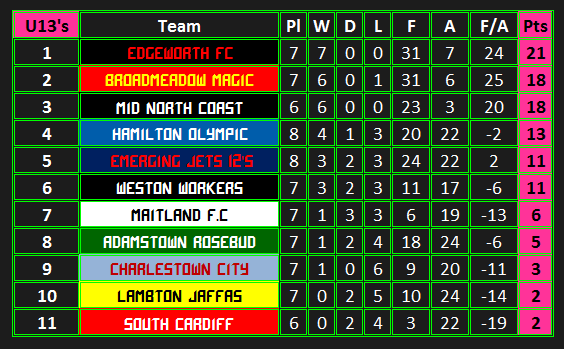 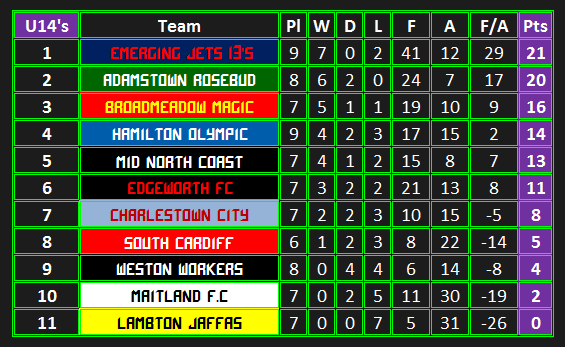 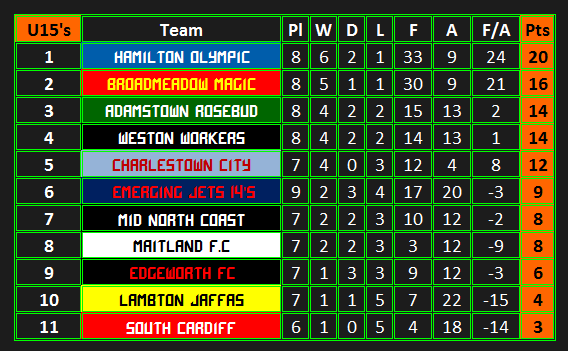 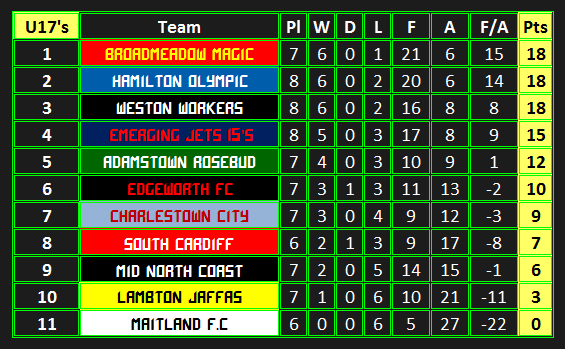