Hamilton Olympic took top spot on the NPL table (albeit with Broadmeadow to play their Round 7 match tomorrow night) with a 3-1 victory over the previously 2nd-placed Weston Workers Bears at Rockwell Automation Park. I went past the ground on the way to the New-FM match at Cessnock and it looked like a decent-sized crowd in, even at that early stage of the day.

Weston would have wanted to five Robbie Turnbull a win in his 200th match but it wasn't to be as the visitors stormed home with a win. Troy Hearfield's goal cancelled out Jacob Bailey's opener but two goals to Kane Goodchild was enough to seal Hamilton's fourth win of the season and move them into first place.

In the 22's, Hamilton overtook the Bears with a 4-2 victory. It was Olympic's third win of the season whilst it was a third defeat for the Bears. In the 19's, Weston's top of the table side kept their unbeaten run alive and recorded a sixth victory of the season, comfortably seeing off Hamilton 4-1.

The Magpies went ahead when Ben Martin scored from long-range and it was doubled by Alex Read just before the half-time break. Harry Maquire sealed the deal for the Magpies and moved them above the Charlestown City Blues on the NPL table.

As important as this result was for Maitland, it was as equally disappointing for the visitors. Charlestown appear certain to be fighting the drop at the end of the season and losing a game like this one is simply not going to help at all. If the Blues don't improve soon they'll be playing New-FM football next year.

No word on goalscorers or anything but Lambton and Adamstown have drawn their Round 7 NPL match at Arthur Edden Oval. The stalemate does no favours for either side and from what I've heard the Jaffas were lucky to get anything out of the match. Correct me if I'm wrong.

*UPDATE: The 22's ended with a 3-2 victory for the Lambton Jaffas who enter the top four with the close win whilst Adamstown remain rooted to the bottom. In the 19's, Lambton were too good, running out 5-2 winners over Adamstown.

It's been an emotional week for the South Cardiff Gunners and Sunday's game was one they wanted to try and win. It was always going to be tough against a quality Edgeworth side and despite putting in a decent shift in the 1st half, the home side went in behind at half-time.

Edgeworth continued their class in the second-half and from all reports deserved to come away with the three points. No word yet on the 22's but I know the 19's was postponed.

*UPDATE: Edgeworth won the 22's 2-1. With their fourth win of the season, the Eagles' reserves remain undefeated and move to the top of the table.

The Jets Youth got off to the worst start in their re-scheduled fixture at Magic Park as the home side broke through and went one up within the first five minutes. Daniel Casciaroli gave the home side the perfect start with his first goal of the campaign.

The lead was short-lived though as the Jets equalised through Benjamin Hay just four minutes later. A hectic opening period to the match, most of which saw Magic attacking was capped off by a neat Peter Haynes finish after the Magic captain got on the end of a Scott Pettit pass.

The young Jets created one or two chances but were finding it hard to defend against Magic's pacey and skillful attackers. The pressure paid off when Kale Bradbury bagged a goal against his former side in the 32nd minute and then moments later, Dino Fajkovic put his name on the scoresheet and tied Bradbury as Magic's top goalscorer in 2015.

The serious problems at the back continued for the Jets Youth and were compounded as Bradbury scored a second in the 43rd minute and put the home side up 5-1. By this point the young Jets were extremely frustrated and just wanted to get into the changerooms for half-time.

Michael Kantarovski had a decent match and put his name on the scoresheet right on the half-time whistle. Both Jets goals were reasonably lucky and the second one I think may have come from an offside play but I couldn't tell from my angle.

After an entertaining 7-goal first half, the two sides produced a rather lacklustre second half to say the very least. There were a couple of chances for both sides but neither failed to find the net and I think the home side took the foot off the pedal a little bit.

The Jets Youth could have done better if they were more clinical with their chances and in my opinion a better attacking side like Hamilton or Lambton may have brought the deficit back to 5-5. Magic really should have score one or two more and put the game further out of reach. 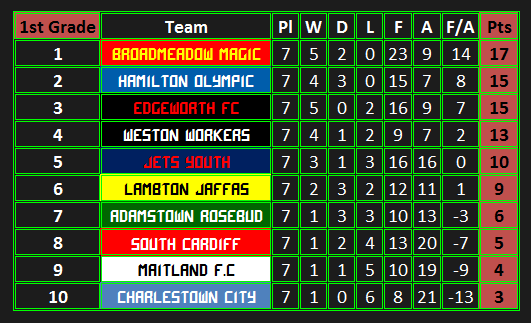 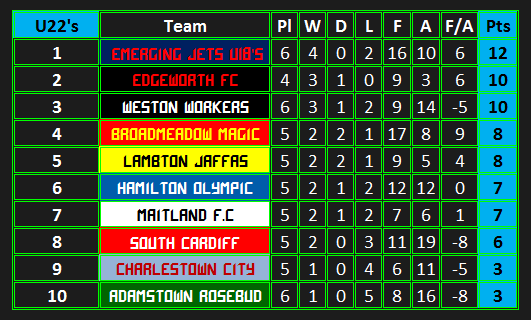 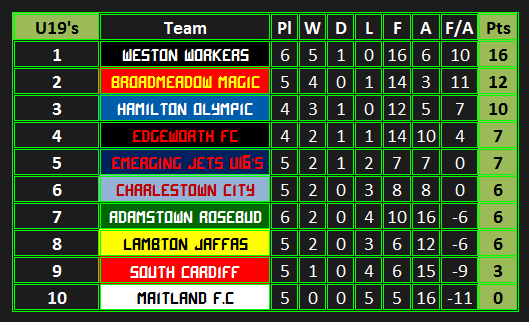