In my preview for this game today I wrote that both teams would be keen to record their first win of the season and I also tipped Adamstown to be the victors. Maitland's fourth defeat in five outings leaves them bottom whilst the Rosebud climb to seventh although they could be overtaken with four games to be played tomorrow.

Former Jet Guy Bates opened the scoring with a free kick in the 28th minute and was on hand to swing in a cross that Nick Hale headed past the keeper to make it 2-0 eleven minutes later. Imposing import Garry Kenneth added the icing on the cake in the 89th minute with a headed goal. Maitland's goal came from a classy Joel Woods header.

It was a clean sheet for the home side in the Under 22's as they pulled off their first win of the season, upsetting Maitland in the process. After going down to ten men late in the first half, the Buds held on for their maiden win in 2015. Goalscorers were Emerson Augey & Alex Ihlow.

In the Under 19's, an Adamstown team that has struggled in the early part of the season rocketed to a 5-1 victory over a poor Maitland side in the opening match of the day. The result leaves Maitland alone at the foot of the table and puts Adamstown into sixth with all four other games to be played tomorrow. Goalscorers for the Buds' 19's were Joseph Barnett (x2), Chase Lallimore, Toby Vines & Jye Bowen.

I got to Magic Park just in time for kick-off and was impressed by the visiting Gunners in the first half. They were arguably the better side in the opening stanza and it paid off with a goal not long before half-time. A 1-0 half-time lead was great for South Cardiff but the job was only half done against the ladder-leading Magic.

The second half was completely one-sided as Magic ran out 4-1 winners. Kale Bradbury bagged an equaliser and before you knew it he had three and Magic were almost out of sight. The visitors had to tighten up defensively as it looked like Magic were going to run away with a big win and to their credit they did manage to stem the bleeding a little bit.

Bradbury scored his fourth and put Magic out of reach with around 15 minutes to go and South Cardiff's lack of luck was on show for everyone to see as they missed a couple of crucial chances late on. A decent showing from the Gunners but ultimately not good enough to beat the ladder-leaders.

It's a second-straight victory for Broadmeadow and with a third of the season now played, they're just six points away from matching their season tally last year. Kale Bradbury's four goal haul now levels him with Dino Fajkovic as Magic's top goalscorer in 2015.

In the Under 22's, the home side were rampant and ruthless as they recorded the biggest victory in any grade of the NNSW NPL this season. After struggling to start the season well, the Magic reserves have fired themselves to a 6-1 mid-week win over Adamstown and now an 8-1 victory over South Cardiff.

The home side were big winners in the opening match of the day as Magic's Under 19's rocketed to a 6-0 victory over lowly South Cardiff. The victory keeps Magic four points behind leaders Weston ahead of a crucial clash with the Emerging Jets next Friday night.

Charlestown City were always going to find it tough overcoming a top four Weston side and they couldn't stop Weston from recording their fourth win of the season. Garry McDermott, Nathan Morris and Jake Millsteed were the goalscorers for the visitors as they kept pressure on Magic at the top of the table.

The Bears got the points in the 22's as well, winning an entertaining five-goal clash 3-2 against a game Charlestown side. It was the third win of the season for the Bears' reserves and moves them into the top four. Goalscorers for Weston were Paul Clout and Nick Thompson with a double.

In the Under 19's, Weston remained on top of the table with a tight 2-1 victory against Charlestown City. It wasn't a dominant victory by any means but the Bears got the job done once again and kept their rightful spot on top of the table. Goalscorers for the Bears were Hayden Burt and Mitchell Fisher.

Edgeworth were strong and brave as they overcame Lambton with only ten men on the field for the majority of the game. The 2-1 result takes Edgeworth over the Jaffas on the league table and leaves them just one point outside the top four.

It was a scoreless stalemate in the reserves as Edgeworth's 22's missed a chance to hold top spot on the league table and in the Under 19's Edgeworth were too strong as they blasted themselves to a 4-1 victory.

Hamilton ended the Newcastle Jets Youth's winning streak with a 2-1 win at Darling St. Oval. Michael Kantarovski continued his fairly impressive season with a goal but it was cancelled out by goals to Kane Goodchild and Andrew Swan. Hamilton now overtake the young Jets on the table.

In the reserves match-up, the Emerging Jets 18's got the points in a 5-goal thriller. The result keeps the Jets on top of the Under 22 table whilst it's a second loss of the season for Hamilton. Olympic's goalscorers were Heath Kepreotes and Ben Koina.

The Under 19's match was postponed due to pitch conditions and will be re-scheduled accordingly. 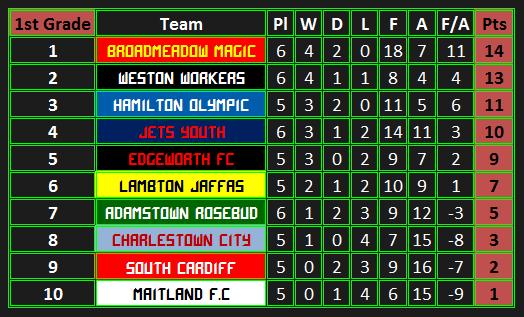 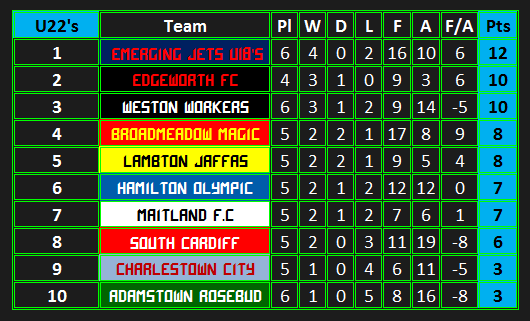 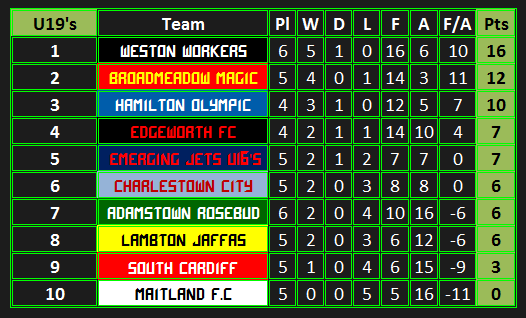