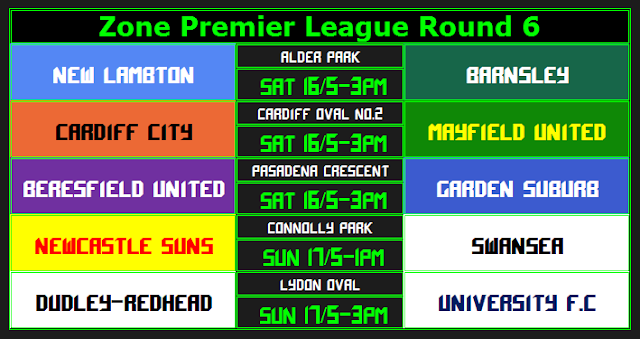 Just a quick preview for each game this weekend in the zone competitions. First up I think the New Lambton Eagles will continue their recent good form with what should be a routine day at the office against struggling Barnsley at Alder Park. The visitors are 0-14 in the goal department this season and unless something changes it'll be a few more as well on top this weekend.

Mayfield United have hit a wall recently with a loss to New Lambton last weekend and a mid-week loss to Beresfield the other day. They'll like their chances though against a mid-table Cardiff City sides. Tigers v Tigers I think will end with the visitors leaving the victors.

Beresfield United are the form team in the Zone Premier League and should be too strong for a winless Garden Suburb side. The Eagles are flying high in 2015 and it very well could be five from five this weekend.

Newcastle Suns started the season slowly with some numbers lacking but are back in style and in my opinion they should get the points against a Swansea side that isn't exactly setting the world on fire with the form. It should be a good clash at Connolly Park nonetheless.

Last but not least I've gone with a 2-2 draw between 5th place Dudley-Redhead and the 3rd-placed University. The students are in good form after two straight clean sheets and seven goals in that time. Dudley though is a tough opposition and I think the draw sounds reasonable. 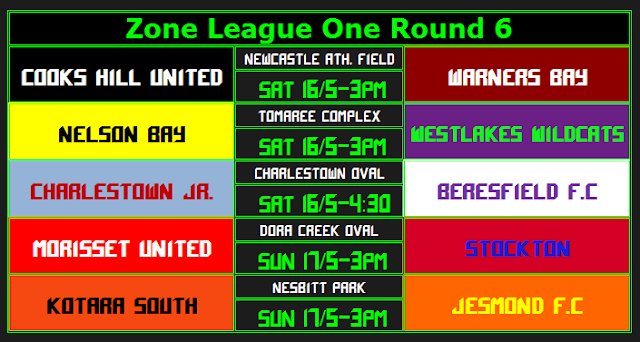 Preview: Zone League One Round 6

Cooks Hill United are arguably the strongest side in this competition and shouldn't have too much trouble in seeing off Warners Bay on Saturday afternoon. The visiting Panthers picked up a win over struggling Nelson Bay last weekend but Cooks Hill is a whole different proposition.

It's a tough one to predict between two struggling sides in Nelson Bay and the Westlakes Wildcats. These two sides have conceded 43 goals between them in eight starts with only five finding the opposition net. I'm going with the home side because they've got a better goal difference...just.

Charlestown FC host Beresfield FC on Saturday and after putting seven past Westlakes last weekend, I'd imagine Charlestown to be the favourites here against a side that copped a 6-1 loss in their last start.

Morisset United are the top team in this division along with Cooks Hill and I can't see them slipping up against Stockton at home. The Sharks will test the home side but it should really be a Morisset win here.

Kotara South are having a decent season so far and coming off the back of a 3-3 draw with Stockton last week. I'm tipping them to return to the winners' circle against Jesmond at Nesbitt Park this weekend. 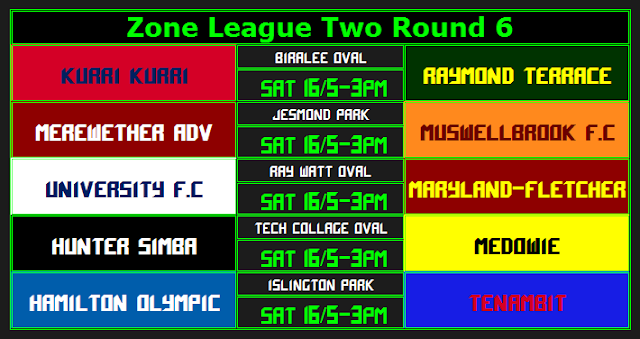 Raymond Terrace are flying high in Zone League Two and shouldn't have too much trouble overcoming a Kurri Kurri side that will be backing up from a mid-week catch-up draw with Merewether Advance.

Talking about Merewether, they're hosting Muswellbrook this weekend and I've tipped them to lose to the Eagles. It's a game that could go either way but I like the visitors' chances in this one.

Maryland-Fletcher FC haven't hit great heights in their first season under the new name and will need to improve a fair bit if they want a result at Ray Watt Oval this weekend. Uni should be getting the three points.

Hunter Simba are enjoying life in Zone League Two this season and at this stage the fixture list says the game will be played on the outer field at the TAFE. It's a field that took a while to recover from the storms last month and the goal mouth at the carpark end is rather sloppy.

There's a chance the game could be moved to the main field inside the TAFE campus which I can tell you from experience is a very good surface. I've tipped the home side to win nonetheless.

Tenambit were unlucky to go down to Merewether last weekend and although Hamilton did lose to Medowie in their last start, the Olympic boys should be too strong here. 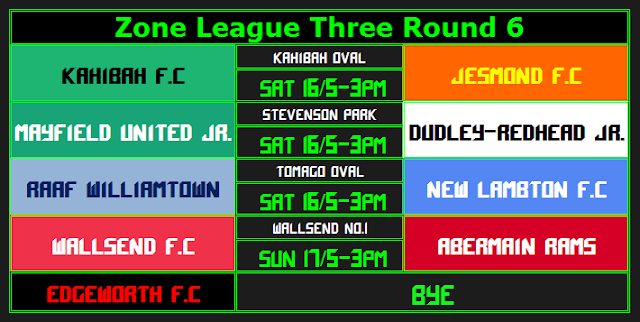 I've gone with the draw between Kahibah and Jesmond on Saturday. The two sides aren't too far apart on the league table and a 2-2 draw seems like it'd be a fair result given their earlier season form.

Dudley-Redhead are the form team in this competition and should be too strong for Mayfied on Saturday. The Dudley ZL3 side are four from four and it wouldn't surprise many if it's five from five this Saturday.

The RAAF side are finding form early in the season and got a decent 4-2 win on the road at Abermain last weekend. I'm sure they'll get the job done against the visiting New Lambton this weekend as well.

Last but not least I've gone with a 1-1 draw between evenly matched Wallsend and Abermain on Sunday.
Posted by Ty Stedman at 15:53