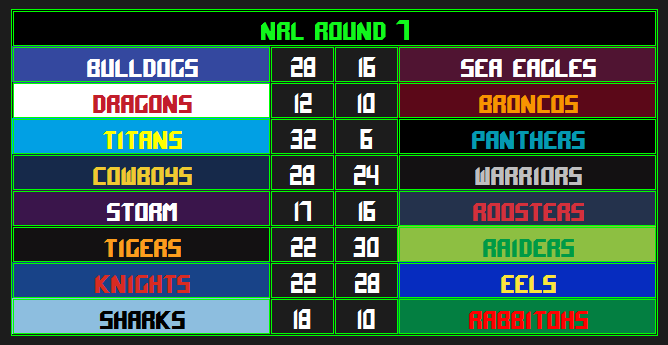 It was a weekend of upsets as the Broncos, Roosters and Rabbitohs all found out. The Dragons were solid as a brick in defence and are have now found themselves in equal top spot on the NRL ladder. I tipped the Dragons as they're extremely hard to beat at Kogarah and they know how to win tight games.

By the way, if you're a Dragons fan and liking the form, they're paying a whopping $23 to win the Premiership. I don't normally promote betting on this site but that's good value. If they can get the job done against the Roosters next week, watch that $23 drop to around $13.

A big pat on the back has to go to the Gold Coast Titans who outclassed the Panthers on Saturday afternoon. After putting a few past Parramatta last week, the Gold Coast did the same to Penrith and are started to build their confidence after a horror pre-season.

At the foot of the table are the Manly Sea Eagles and it pains me as a member and a lifelong supporter to see the club in last spot. As much as the off-season media turmoil with Cherry-Evans is playing a part, it's a crippling injury crisis that's hurting Manly the most. They'll need a massive turn around if they want to win in Melbourne on ANZAC Day.

Talking about ANZAC Day, the Sydney Roosters will be in need of a win in their clash with the Dragons. Three-straight losses will no doubt have Trent Robinson fuming because they were all close, winnable games for the tri-colours. It's a real possibility that the Premiership contenders could drop out of the eight with a loss on Saturday.

Finally, a huge shout out to the 3,900 or so fans that showed up to Shark Park on Monday night. Braving what was classed as the equivalent of a Category 1 Cyclone, the Cronulla faithful deserve a massive wrap. Not many would leave their lounge rooms in those conditions. Good to see the boys give those fans something to cheer as well with a massive win over South Sydney. 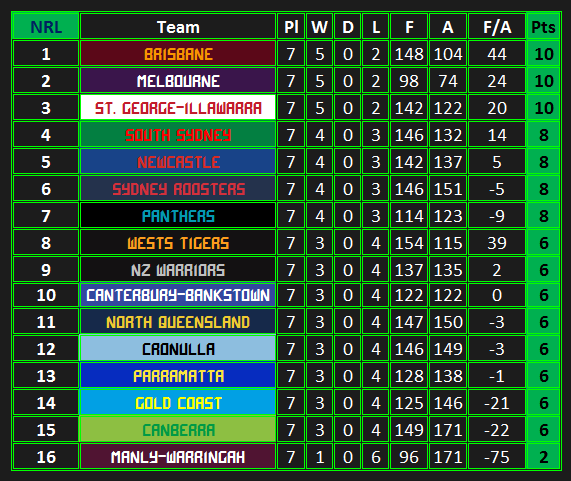