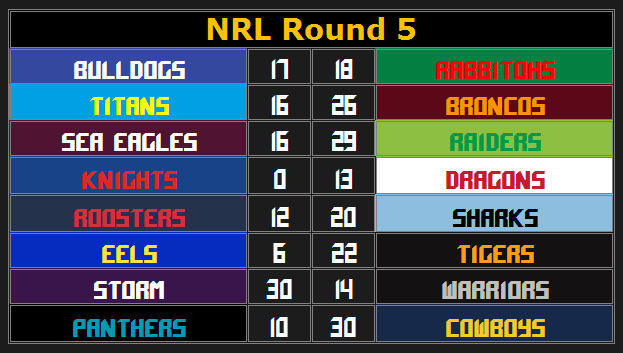 Even though teams like the Cowboys and Storm put in pretty good performances I can't go past the Cronulla Sharks. What a morale boosting, confidence-installing victory over the premiership favourites. The Sharks were physical and precise in the 20-12 win and unveiled young playmaker Jack Bird has a potential star of the future.

No 13-0 is not a flogging in anyone's language but being only the second team to hold the Knights scoreless at Hunter Stadium in 27 years is hugely impressive. The Dragons have now won three straight and are a defensive-minded side that could pull off some more big scalps this season.

The Panthers early season form seems like a distant memory but the Cowboys have found some much-needed form. A 30-10 win in NSW isn't a regular occurrence for the North Queenslanders. This is the form everyone was predicting in the pre-season and Thurston's men are starting to live up to the hype.

-How good was Pat Richard's last ten minutes in Monday's win over the Eels. He showed some sort of skill to help the Tigers to a massive win. The young Tigers are an exciting football team and I hope they can make the finals.

-Hoping for the Tigers to make the finals isn't something I'd normally mention but at the moment it doesn't look like my beloved Sea Eagles will be there this year. I turned Saturday's game off at half-time. I know there were a few players out but the fact is, Manly look absolutely horrible at the moment. I don't want to single out players but our left-side of defence was simply not good enough.

-And finally a note about Daly Cherry-Evans' complaints against what he calls "so-called Manly fans". I've been a life-long Manly fan and if the teams need to cop an earful and I'm there at the game, I'll give them an earful. Daly should learn about freedom of speech. He'll be the main man on the Gold Coast and the pressure will no doubt double. Manly fans are turning on their star-halves and both need to lift their game.