Weston Workers Bears remained on top of the table, moving to six from six in the process and handing the Mid North Coast their fifth loss of the season at Rockwell Automation Park.

Charlestown City Blues were downed by Hamilton Olympic 2-0 at Lisle Carr Oval. It was the fourth loss of the campaign for the Blues whilst Olympic moved up to third with the result.

Edgeworth Eagles 17's moved into 6th position with a 4-1 victory over struggling Maitland. It's now five games without a win for the Magpies' 17's whilst Edgeworth bounced back from a loss to the Emerging Jets last week.

Lambton Jaffas upset Adamstown on Sunday, with the 2-1 result taking the Jaffas 17's away from the bottom of the table and stalling the Rosebuds progress towards the top of the table.

Finally, the Broadmeadow Magic were too good for the Emerging Jets Under 15's side. Magic kept in touch with top of the table Weston with the 2-0 result. 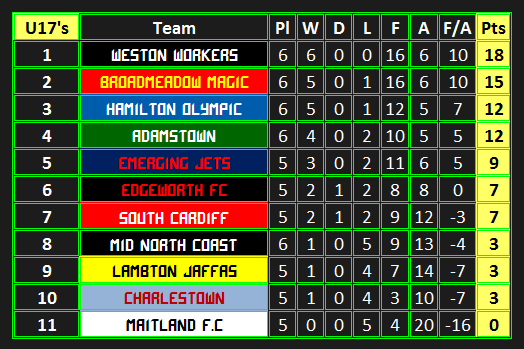 Hamilton Olympic kept the pressure on Broadmeadow Magic at the top of the table with a 1-0 result over Charlestown City. The Blues 15's have fallen to three straight 1-0 losses which would be a bit of a downer for the players. They need a bit more in front of goal to get some results.

Edgeworth are struggling a little bit in the Under 15's competition and could only manage a draw at home to Maitland this weekend.

Adamstown's 15's inflicted some more pain on a Lambton side that are winless in season 2015. The good news for Lambton is that they only conceded one goal after a rough few weeks. 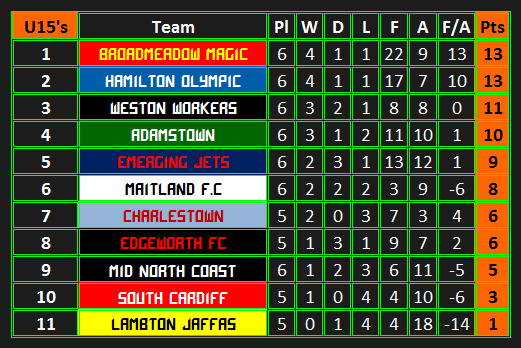 Weston and Mid North Coast drew in the 14's which was a result that benefited the visitors much more than the 9th-placed Bears.

Hamilton Olympic grabbed a 2-0 win over Charlestown City Blues, moving the Olympic 14's to fifth and above the Blues in the process.

Edgeworth's 14's eased to a 6-2 result over lowly Maitland on Saturday afternoon. The result boosts the Eagles goal difference whilst Maitland need to plug the holes at the back after a stream of goals finding the back of their net.

Adamstown's 14's put pressure on the Emerging Jets at the top with a 3-0 win over bottom-placed Lambton Jaffas. The result takes the Rosebud up to equal first after the Jets 13's lost their match.

Finally, Broadmeadow were the victors over the Emerging Jets 13's side on Sunday. The result kept Magic in third spot and gave the Jets their first loss of the 2015 season. A big result for the Magic side. 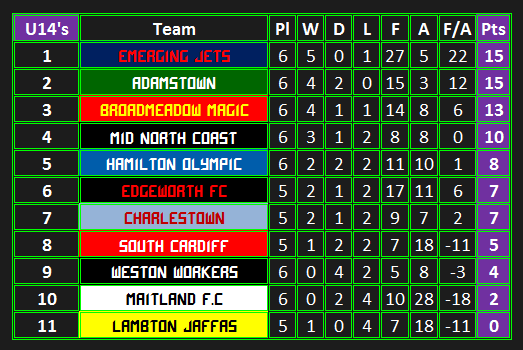 Weston's Under 13's were in good form going into this one but the Football Mid North Coast 13's were simply too good on the day, easing to a 5-0 result in what was upwards of a 6 hour round trip from Port Macquarie to Weston. Impressive to say the least.

Hamilton Olympic inched closer to the top four with a 3-1 victory over struggling Charlestown City at Lisle Carr Oval.

Edgeworth's 13's extended their winning streak to five with a 4-0 win over Maitland. The young Eagles have scored 24 goals in those five wins.

Adamstown and Lambton couldn't be split in a 2-2 draw on Sunday that would have suited the Jaffas more the Rosebuds.

Finally, Broadmeadow remained on top of the table on goal difference after seeing off the Emerging Jets 4-2 at Magic Park. 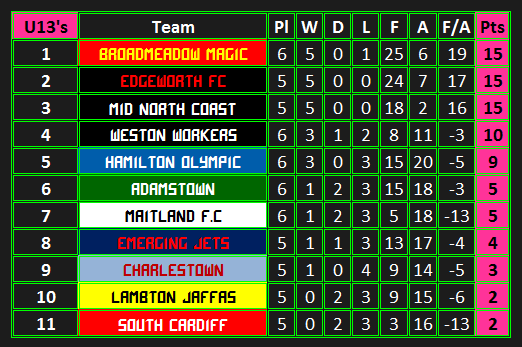