The Coalfield Clash between Maitland and Cessnock ended with a thrilling 32-all scoreline. The Pumpkin Pickers led 24-12 at the half-time break but were unable to hold on for a second-straight win with the Goannas staging a second-half comeback causing the points to be shared.

Lakes Make It Two From Two At Kurri Kurri:

Kurri Kurri Bulldogs were disappointing as they went down 40-22 to an in-form Lakes United side. The Seagulls made it two from two to start the new season and repeatedly exposed the Kurri Kurri defenders. Lakes are now in outright first with the earlier draw meaning Lakes are the only team on four points.

Central Newcastle went down 44-16 to the Scorpions in the other game on Saturday. It's hard to know what went wrong for the Butcher Boys after last week's late loss to Maitland. Macquarie Scorpions bounced back from a loss to Lakes last week and moved into 6th position.

Wests Return To Form With Six-Point Win Over Souths:

Western Suburbs bounced back from last week's heavy loss to Cessnock with a 22-16 win over South Newcastle at Harker Oval. I'm sure this game kicked off at 3pm which with the Knights kicking off down the road at 4pm isn't the best idea. Kicking off earlier and finishing in time for the Knights game would be a good way to get a crowd in. Either way, a decent result for the Rosellas. 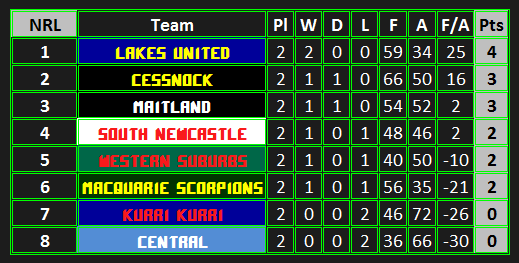