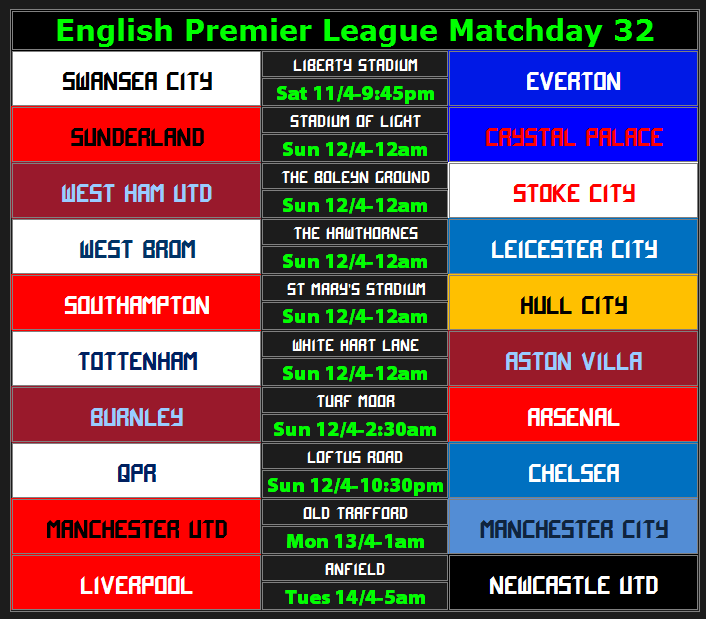 I've gone with a more basic looking preview for both the EPL and the MLS this week to try and focus more on the previews and less on the graphics. First up in the Premier League this weekend is the early kickoff fixture between Swansea City and Everton at the Liberty Stadium.

Swansea are coming off the back of a fairly convincing 3-1 win over Hull City last weekend and currently occupy eighth position on the league table and European football isn't likely but it's still not impossible with teams like Arsenal and potentially Liverpool still alive in the F.A Cup.

Everton on the other hand have had a pretty poor season by their standards but are in a bit of form after three straight victories moved them away from any potential slip into the relegation zone. A top 10 finish isn't unlikely but the Toffees will need to keep up their winning ways.

For my tip, I'm going with the home side. Swansea is a tough place to visit (just ask Manchester United) and I can't see them letting this one slip after performing so well last week.

Both these sides picked up big wins last weekend. Sunderland snagged a crucial victory as they look to move away from the drop zone with Jermain Defoe scoring a spectacular goal, sealing a 1-0 win over arch nemesis Newcastle United. It was arguably the biggest win of the season for the Black Cats.

Crystal Palace however also picked up a big win over Manchester City and all but ending the defending champions title hopes for this season. So both these teams are coming off the back of wins which makes this game in particular hard to pick.

They always say 'when in doubt tip a draw'. I could write reasons for why I think either team could win this one but I'm going to play it safe and go down the middle.

Both West Ham United and Stoke City are coming off the back of 2-1 defeats, the Hammers away to Leicester and the Potters away to Chelsea. There's not too much riding on the result here as neither team can push for a European spot but finishing inside the top ten is always better than not so both will be hungry for the three points.

Stoke scored one of the all-time great Premier League goals last week when Charlie Adam netted from his own half. The Potters aren't known for their spectacular style but that was certainly up there as one of the best goals you'll see in any competition this season.

I'm going to back the home side here. West Ham are always a tough team to beat at the Boleyn Ground and I think they'll be desperate to bounce back from a defeat to relegation-threatened Leicester last week.

This is another one of those games where it's a lot more crucial for one team than it is the other. If Leicester City win this they could be one win away from safety depending on other results. It's an uphill battle for the Foxes but against a West Brom side that lost 4-1 to QPR last week, surely there's no better time for Leicester to build some form.

In my opinion though it's an important game for West Brom as well. Not as important as it is for the visitors but the Baggies will surely want to avoid a second-straight home loss to a relegation-battling team. A loss to Leicester and suddenly the Baggies will be looking over their shoulder.

I'm tipping the home side here but anything could happen.

This is one of the more crucial games on the weekend. Southampton need a win to keep their hopes of making Europe alive whilst Hull City are hovering just a point above the relegation zone. Something's got to give on Saturday night.

The fact is, this isn't a game Southampton are expected to lose. Hull's last away win came on Boxing Day and they're the likely victim if any of the bottom-three make a move out of the drop zone. I think the Tigers are going to struggle at St Mary's.

Southampton have got to win this. Their hopes of European football are starting to fade and a win would keep them in the race for the Europa League spots. Expect a big one from the Saints.

Another game with both European hopes and relegation fears riding on it. Tottenham have been impressive lately with Harry Kane scoring goals for fun but they hit a wall last week at Burnley. This time round I don't think they'll fail to overcome Villa.

Villa let in three against Manchester United last week and I think it'll be similar this week at White Hart Lane. Tottenham are in need of a win and they'll most likely get it here against the Villains.

Burnley have found some form recently and held Tottenham to a scoreless draw at Turf Moor last week but this is a much harder assignment, taking on an Arsenal side that smashed Liverpool 4-1 last week and scored some thrilling goals in the process.

Burnley are fighting against relegation and are producing some good results at the moment but this game I think is a bridge too far. Arsenal are just too good right now and they should be too strong for the Clarets.