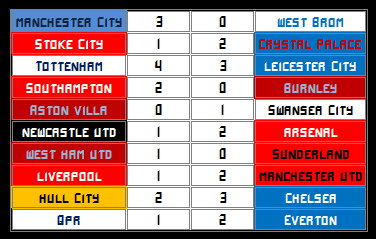 Liverpool's hopes of making the top four have taken a massive blow after Manchester United's 2-1 away win at Anfield. Juan Mata put the visitors up early on and with Steven Gerrard receiving his marching orders seconds after subbing on, Liverpool were always going to struggle to find their way back into the match.

A second Mata goal put United up 2-0 but Daniel Sturridge gave the hosts some hope. It wasn't enough as United held on 2-1, despite Wayne Rooney's missed penalty in the final few moments.

Arsenal have had some form lately and are now just one point behind 2nd-placed Manchester City. With Liverpool losing their match, the Gunners now have a bit of breathing space in the top four after their 2-1 win at St James' Park.

It was always going to be a big ask for West Brom to win at the Etihad but going down to ten men was never going to help, especially when the referee sent off the wrong player. City were never really threatened and just went through the routine in a 3-0 win that keeps them ahead of Arsenal in 2nd place.

Chelsea are a side that never seem to do things the easy way. Eden Hazard opened the scoring within two minutes and a Diego Costa goal in the 10th minute had the visitors almost out of sight. That was until the hosts scored twice in three minutes and draw level in the 28th minute.

Chelsea were able to get the winner through Loic Remy but again, it should have been a bit easier for the Blues. Still, a win's a win.