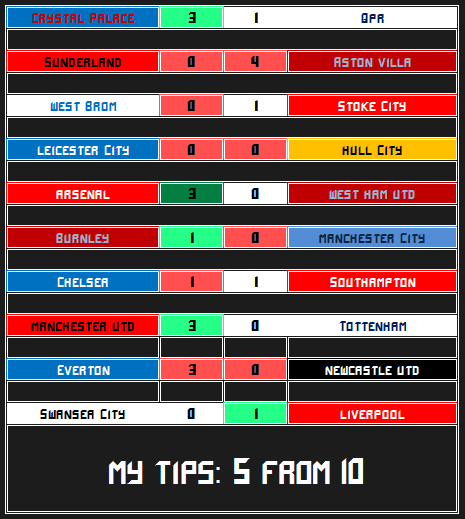 Manchester United's 3-0 win over Tottenham was the all-round good performance Louis Van Gaal's side has been hoping for. It's a crucial time in the season and to grab an impressive 3-0 win over in-form Tottenham was a big result for the Red Devils as they try and hold firm to their spot in the top four.

This result would have been so much worse if Chelsea won their game against Southampton but it's still a defeat that has all but cost City any chance of retaining the Premier League title. Yes Chelsea could still drop points over the last two months but City are lacking confidence and their seems to be a lot more going on behind the scenes. Not a good look at all.

It was a poor night for City but a great one for Burnley who moved a little bit further towards Premier League safety. It was a crucial victory for the Clarets and if they can grab a couple more wins in the next few weeks they might find themselves outside of the drop zone.

It's Wednesday morning Australian time as I type this and Sunderland have reacted swiftly to their 4-0 home loss to Aston Villa on the weekend by letting Gus Poyet go and bringing Dutchman Dick Advocaat.

Advocaat has bucketloads of experience with a coaching career spanning almost thirty years however this will be his first time coaching in England and it's yet to be seen if he can save the Black Cats from relegation.

It's never good to see a manager go but letting Poyet leave now was a smart decision. The fact is Sunderland were falling rapidly towards the drop zone. Now Advocaat has a game or two to adapt the side to his style and still have a chance to avoid relegation.