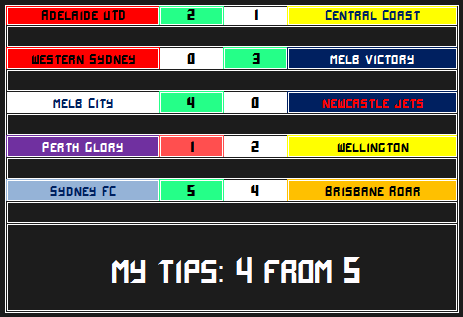 Melbourne Victory were superb on Friday night as they systematically shut the Wanderers down and temporarily go top of the table with an impressive 3-0 win. The struggling Wanderers never looked likely as a Besart Berisha brace either side of a goal to stalwart Archie Thompson was enough for the Victory to leave Parramatta with a comfortable three points.

Wow! I only caught the last half hour of this game and probably saw three, four, maybe five goals. To be completely honest I'd have to look at a stats page to make sure. It was raining goals at Allianz Stadium in a further example of why Sydney need to focus their attention on the defensive end of the park.

It's all good to have Marc Janko scoring goals for fun but the Sky Blues defence needs to be worked on. Going into the finals they can't afford to bring that sort of shaky defending into the business end of the season. Conceding four at home is never a good look regardless of the victory.

It's taken the good part of a decade but the Wellington Phoenix have finally reached the top of the Hyundai A-League table. With their future beyond next season still in limbo, the Phoenix players could only do what they're paid to do and they certainly did that well.

Whether or not they'll remain in the A-League is a question for another day but for now the on-field success is building a strong case for keeping the Kiwi's in the league.