Canterbury-Bankstown take on Parramatta in what should be a highly-entertaining match-up on Friday night football. The Eels got their season off to the perfect start with a 42-12 win over Manly last Friday and should be up for a challenge against the Bulldogs in Round 2.

At the time of writing, Parramatta are paying $2.30 for the win with the Bulldogs at $1.65. This will no doubt shorten before the game as Parramatta shouldn't be that far out on the odds after last week. The Bulldogs are without Josh Reynolds which will play a part in the game. I'm not sure why the odds are the way they are but I can't go past the Eels here.

This one is pretty tough to call but I'm going to lean towards the Broncos only due to the Wayne Bennett factor. The super-coach would have been disappointed with his side's poor start to the season and will surely have them fired up for a big clash on Friday night.

Sam Thaiday is a player who needs to step up his form and help lead his side from the front as they take on Paul Gallen and the Sharks. Expect a low-scoring game.

Super Saturday kicks off with a game between the Panthers and the Titans at Pepper Stadium. Penrith were impressive last week against the Bulldogs although letting in two or three late tries will be a something they'll be aiming to correct against the depleted Gold Coast Titans.

Despite missing a few of their big names, the Titans stood up to the challenge of the Wests Tigers last week but I can see them finding this game a lot tougher in front of what will most likely be a vocal crowd at the foot of the mountains.

Penrith should be able to do enough to pick up the two points here.

It pains me as a Manly fan to see the team in such turmoil over the last week or so but all contract talk aside, losing 42-12 to Parramatta was a disaster for the side from the Northern Beaches. They'll need to turn all that around against another arch rival Melbourne this weekend.

The loss of Kieran Foran to injury is sure to be a big out for the Sea Eagles who bring in Jack Littlejohn to play in the halves. However the timely return of Steve Matai will surely boost team morale. Melbourne will remain unchanged after their tight win over St George-Illawarra on Monday night.

I hardly ever tip against Manly but I would if this game was anyway else but Brookvale Oval. The venue alone makes beating Manly a lot harder and I can't see the Sea Eagles letting this chance go. They must get a win or else they'll find themselves falling outside of top eight contention sooner rather than later.

A marathon run of three back-to-back games ends with North Queensland hosting Newcastle at 1300Smiles Stadium (great name btw) in Townsville. The Cowboys had an absolute shocker last week against the Roosters and will be hoping to bounce back against a Newcastle side that aren't that strong on the road.

I'm not sure what the weather predictions are for tomorrow night but I can almost guarantee that it'll be a humid night and that should give the Cowboys a slight advantage. It's not easy to travel to Townsville and I can see the Knights having some trouble.

First off let me say just how good it is to see two of the biggest teams in the NRL playing at 4 o'clock on a Sunday afternoon. Not Thursday night like recent years or even Friday. Sunday afternoon is traditional footy time and it's been a long wait to have live games on Channel Nine on Sundays. Good job by the NRL for the great scheduling of this game.

Now onto the actual game. Both this teams looked impressive in big wins last week but the Rabbitohs I think looked a little bit better than their arch rivals. Last season's Preliminary Final loss to Souths will drive the Roosters but I think the Rabbitohs will get over the line here in what should be a thoroughly entertaining match-up.

The Raiders return to Canberra Stadium for the first time this year when they host the New Zealand Warriors. Ricky Stuart's men pulled off a great win against the Sharks last week and will be hoping to gain some early season momentum with a win over the Warriors on Sunday night.

New Zealand couldn't get the win in Newcastle last week but are the favourites here. However the Warriors are a very unpredictable team. One week they'll lose by 20 and the next they'll win by 30. It seems like that anyway. I can see the Kiwi's grabbing the win in the capital and shooting up the NRL table as a result.

Neither of these teams looked too impressive last week even though the Tigers did in fact win against the Gold Coast Titans. St George-Illawarra never really got going against the Storm and with Josh Dugan under an injury cloud I can't see them doing too much better this time round.

Wests Tigers did win last week by a point against the Titans but their performance left a lot to be desired. They got lucky at the end of the day. They got very lucky when Mitchell Moses wasn't suspended for the awkward high shot on William Zillman as well.

Anyway all that aside, I think the Tigers will get the job done here. I love watching their young halves go around and with a fully fit James Tedesco they have the potential to put on some great performances throughout the season. Tigers to win here. 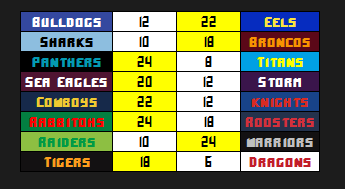